Green Lantern on the Go 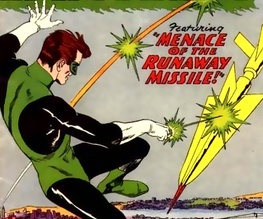 Good news for all comic-book adaptation fans. Shooting on the new Green Lantern film is well under way, with director Martin Campbell (Casino Royale) and star Ryan Reynolds (X-Men Origins: Wolverine) seeming to get on like a house on fire. Reynolds told Total Film “Part of [Martin’s] charm is that he has balls of titanium, and the other part is that he’s slightly crazy, and you have to be to take on something with the scope of Green Lantern. He’s less of the director and more of a general.”

As any comic geek worth his salt knows, there’s been many Green Lanterns over the years, each imbued with a bunch of kickass powers by a magical green ring (honestly, not as lame as it sounds). Reynolds will be playing Hal Jordan, the Green Lantern who first appeared in the late 50s, and early reports suggest the film will remain fairly close to the comics, with test pilot Hal receiving his power ring from a dying alien. A dying alien with a bulbous red face, no less. Called Abin Sur.

But it’s not the only superhero role on the cards for Reynolds, who’s also set to appear in Deadpool, a spin-off movie from the character he briefly played in Wolverine. But with Green Lantern not scheduled to hit the cinemas until sometime in 2011, it’ll be a two horse race to see which reaches us first. We’re just hoping they didn’t go with the Green Lantern’s classic weakness from the comics – the colour yellow. Yeah, we’ll admit that bit is pretty lame.

Previous: Tintin Needs Two Years Of Post Production
Next: Jessica Alba Gets Her Belgium On