Hulk could get his own movie(s) after Avengers 2 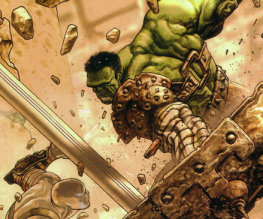 Hot off the press, the new Ruffalo-Hulk rumours are sure to weaken every Marvel fan’s knees. Ever since the giant green success that was Mark Ruffalo in Avengers Assemble, us ordinary folks have been awaiting the news for a Ruffalo-Hulk spin-off, in a stand alone movie or a Hulk musical (well, some of us anyway). So when Mark Ruffalo signed a six-picture deal last year, we thought it would only be a matter of time before Marvel announced the exciting six-picture Hulk bonanza. Finally, Latino Review has reported that the spotlight will finally be on the Hulk post-Avengers 2. Audiences watching Avengers 2 will need to stay in their seats post-credits to see the giant green bean in all his angry glory…

According to the site, Avengers 2 may feature a post-credits scene which sees the Hulk being launched into space after being regarded as a serious danger to Earth by Marvel’s Illuminati (a secret organisation comprising of Iron Man, Charles Xavier, Doctor Strange, Black Bolt as well as others). The idea after this is to introduce the Planet Hulk arc, which essentially sees the Hulk imprisoned as a slave, forced to participate in gladiatorial games whilst stirring up followers and warriors for a rebellion against his alien planet captors. Cue Planet Hulk: the Movie. Too excited for life right now? It doesn’t stop there.

With the Hulk as gladiator and hero, the events in Planet Hulk will set up the story arc for Avengers 3 (!!), which would then take on the plot featured in Greg Pak’s World War Hulk book. World War Hulk sees our green Goliath storming his way back to earth with his loyal band of fighters for the most smashingest bit of revenge ever; against his once-fellow Avenger comrades and the bastards that shot him up to space in the first place. Holy MOLEY.

If Marvel go ahead with these plans, Mark Ruffalo is going to be an extremely busy and angry bee for the next few years. Having provided fans with comic relief, heroic actions, emotionally-fraught scenes and some enraged Hulk-ness in Avengers Assemble, we can’t think of anyone better than the Ruffalo man to carry on this heavy Hulk responsibility. Also, it’s in his contract. But what does this mean for serious Marvel comic fans? 20th Century Fox currently own the rights to the Fantastic Four superheroes (who feature heavily in the Hulk stories) so it’s unlikely they’ll be making an appearance in the Marvel Hulk film bonanza. How many liberties are Marvel going to have to make?

We’re still awaiting Guardians of the Galaxy and The Avengers 2 (due out in May 2015) but obviously Marvel are milking what they can for now. None of this is confirmed yet, unfortunately, but we’ll keep you in the loop with further Hulky developments.

Marvel fans: do you think more Hulk movies should be given the go-ahead? General public: do you actually want to see more of the Hulk? IF NOT, WHY NOT? Let us know below.