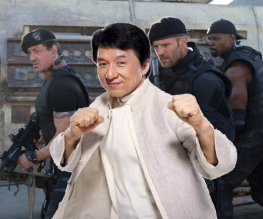 Jackie Chan, the legendary comic martial artist, has accepted Sylvester Stallone‘s offer of joining the cast of The Expendables 3, which might be the greatest thing ever. With such an enormous cast of “A”-listers, the latest outing for the high-octane nostalgic shoot-a-thon is unlikely to have as much Jackie Chan as we’d all like, but his presence is very much welcome!

In recent years, Jackie Chan has pulled away from the generic-comedy-with-a-bit-of-punching films that begun with Rush Hour, trying to get back to his roots in Hong Kong cinema. His most recent project, CZ12, had him playing a character called Asian Hawk (we honestly didn’t make that up), and it was apparently this film that prevented Jackie Chan from joining The Expendables 2. Now the film has wrapped, he’s ready to give us hungry Westerners a taste of the classic Jackie Chan that we’ve all come to know and love.

As Jackie Chan himself said:

“[Sylvester Stallone] had invited me to be in The Expendables 2 but I was too busy filming CZ12 and couldn’t make a commitment to the film. But he did extend his invitation to the third movie, which I agreed on the condition that I will be appearing as more than just a minor role with a few scenes.”

Well that’s good at least. Maybe he’ll have more of a role than poor Jet Li, whose character Yin Yang (we really wish we were making that up) can be summed up with the few lines he gets to reel off:

Let’s hope Jackie Chan doesn’t get the Jet Li treatment. Jackie Chan also revealed that he asked Sylvester Stallone for The Expendables 3 to be more of a “buddy-buddy” movie, and the Italian Stallion agreed. How sweet and disturbingly naive does Jackie Chan sound? Although you might think that Jackie Chan and Sylvester Stallone wouldn’t have much in common, they in fact both started out their careers with pornography! It’s all a rich tapestry, people.