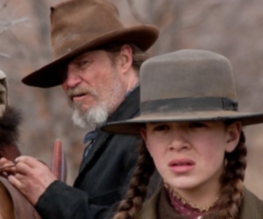 True Grit is the tale of a teenage girl named Mattie Ross. With her father murdered, tough young Mattie sets out to bring his killer to justice, enlisting the help of one-eyed, drunken Marshal known as Rooster J. Cogburn. If you know your Westerns, chances are it may sound familiar. However, as Joel and Ethan Coen step up to retell the tale that won John Wayne an Oscar in 1969, we should probably make something clear; this probably isn’t the True Grit that your dad loved.

It’s well known that the Coens previous attempt to remake famous oldies have not gone well, resulting in one of their weakest films, The Ladykillers. But this time around the brothers are reworking the source material, planning to be more faithful to Charles Portis’ original novel, and, having seen No Country For Old Men, we all know what the Coens can do with a good novel. The cast places No Country‘s Josh Brolin alongside Jeff Bridges and Matt Damon, and introduces actress Hailee Steinfeld as the stubborn young lead. Couple this with some stunning visuals (a silhouetted figure tumbles down a pit; a lone rider gallops across the horizon toward the setting sun), and the Coens’ latest preview leaves a lot to be excited about.

On a side note; it might be a bit cheeky to use Matt Damon’s Academy Award winner status as a selling point, considering he won his award for writing and has only been nominated for acting, but we’re so happy to see a new Coens trailer that we’ll gladly let it slide!