Justice League’s future depends on success of Man of Steel 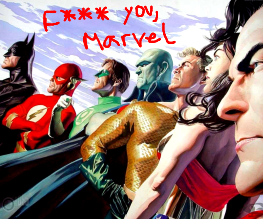 Marvel this, Marvel that. Marvel wah wah wah. When is someone going to talk about something other than Marvel or Star Wars or superheroes in general? Well, today is not that day. BUT we do have some interesting news all the way from the Warner Bros studios. It looks as if Warner Bros are waiting to see how well Man of Steel will fare in cinemas this summer before moving ahead with the Justice League project. What with the success of Marvel’s Avengers Assemble, there’s no doubt that the DC Comic superheroes are feeling a little left out. It’s about time they’re due their own film. But is their future now looking bleak?

It goes without saying that Justice League – an assembling of the popular DC Comic superheroes – will be a massive investment for Warner Bros, so it’s hardly surprising the studios are having reservations over whether to put a green light on the project. Warner Bros’ plan for now is to see how well Zack Snyder‘s Man of Steel performs at the box office before giving Justice League the go-ahead.

This is looking to be a pretty sensible move on Warner Bros’ behalf, considering DC Comic films (Christopher Nolan‘s Batman trilogy franchise aside) have never particularly been a huge success (think Jonah Hex, Green Lantern, Catwoman…). It’s also good to know the Hollywood studios aren’t planning on pouring more money into more potential crap. Having said that, considering the box office hit that was Avengers Assemble (and with The Avengers 2 in the pipeline) – another ensemble film with a different set of heroes probably wouldn’t go amiss, especially amongst DC fans. And us. We’re intrigued. We want to see Aquaman flap about on screen for at least a second.

Let’s not beat around the bush though. Justice League is probably going to happen anyway. No way Warner Bros are going to miss out on that money-making machine. Is this just one massive ploy to get us all to watch Man of Steel?!

Rob your grandma of her loose change and go see Man of Steel this July, if you ever want to see your Justice League superheroes on the big screen. Sacrifices have to be made, guys. Do YOU care?