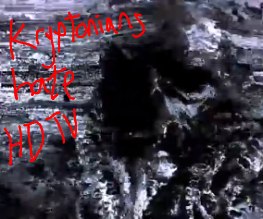 Forget the earth-shattering news you’ve heard in the last few weeks – this latest viral video will even have Kim Jong-un popping anxiety pills. Original Superman villain General Zod (Michael Shannon), from the planet Krypton, has issued a warning to Earth: surrender Kryptonian Kal-El (you may know him as Superman) or Earth will suffer the consequences. Are you feeling nervous? We sure as hell are.

CHECK OUT THE TERRIFYING MESSAGE BELOW:

This Man of Steel clip may be just 30 seconds long, but already citizens of Earth everywhere are running riot: WHERE is this Kal-El and for the love of God will someone just give him up?!

If you hadn’t already worked it out, General Zod issues the ominous threat “You are not alone” before what is presumed to be Shannon’s face appearing distorted and blurry through white noise. Boasting an array of visual effect goodies already, this viral video is sure to send Superman fans everywhere into a flurry of madness. Those pesky buggers at Warner Bros have been keeping it quiet on the Man of Steel front this year (all we’ve had a wounded angry stylist and a few flimsy images of Hollywood actors looking horrified), but Michael Shannon’s appearance (or lack of, should we say) in this viral video is enough to have us wondering what else his General Zod bring to the table? And will it be enough to knock Terence Stamp‘s General Zod out of the hearts of Superman fans everywhere?

Naturally, we have even more questions. Could this warning lead to another Man of Steel treat? Will all this expensive promoting be worth it? Will director Zack Snyder really be able to pull it off? He may have $225 million to blow, but according to the interweb, none of this has been spent on advertising. Plus, along with the viral video, billboards have been erected in Los Angeles featuring coded Kryptonian numbers, that roughly translate to an …. IP address that redirects to Warner Bros website. How coy.

We’ll keep you updated on Earth’s well-being and, of course, any more Man of Steel news. In the meantime, why don’t you pop on over to the other side of BFF and watch the Man of Steel trailer and prepare yourselves for its release date – June 14th.

Are you hiding Superman? WELL THEN GIVE HIM UP, FOOL!