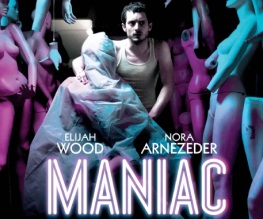 Hold on to your rings. Frodo has gone batshit. We all knew there was something unhinged about Elijah Wood‘s performance in The Lord of the Rings films – that chubby face gurning at the screen, huge deranged eyes constantly full of tears, constipated or drugged up on whatever the elves were pushing in the Forest of Lórien (let’s not forget Cate Blanchett’s Galadriel – talk about tripping balls). Since his departure from Middle-Earth, the boy’s clearly gone wacko, as this poster evidence newly released today will attest. Click on it to expand. 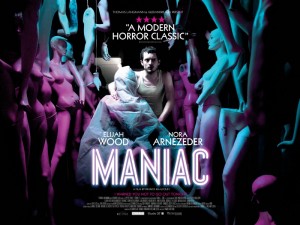 Alright, so unfortunately the Tolkien estate has decided not to go down the Lucasfilm route and pimp off individual characters from the world of Middle-Earth for separate films of their own (although, that would be pretty great – we sense a blog coming). This is actually, as you may have guessed (clever news readers) a poster for Frank Khalfoun’s (P2, Wrong Turn at Tahoe) Maniac, about a disturbed and young and ruthless serial killer who falls in an appropriately strange form of love. Basically, being so damaged himself the central character Frank Zito (Wood) can only express his love by – how shall we put it? – scalping.

The poster’s pretty nifty don’t you think? It’s designed by Sam Ashby, very reminiscent of the Cosmopolis posters out last year. Mannequin hands on strings is also a pleasant touch we think. Bring the family along to this one, show some loyalty to Frodo – we mean Elijah, post-LOTR. Think Sin City, fun for all the family. Check out the trailer below.

Are Elijah Wood’s eyes too big? Are they bigger than Jake Gyllenhaal’s? LET US KNOW

Previous: Godzilla snatches Bryan Cranston and Elizabeth Olsen
Next: This is 40