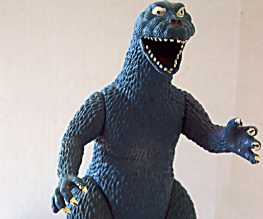 It looks as if an Olsen sister and a meth cook are in talks to co-star alongside Aaron Taylor-Johnson in Gareth Edwards’ Godzilla reboot. Breaking Bad legend Bryan Cranston and up-and-coming actress Elizabeth Olsen are both said to be interested in the battle against the giant lizard, after the script is re-written by Shawshank Redemption writer Frank Darabont. Godzilla is already shaping up to be an absolute winner winner, lizard dinner.

If all goes well, Bryan Cranston might be signed on to play Aaron Taylor-Johnson’s stepfather, whilst the Kick-Ass 2 star will be taking on the role of a soldier. It is currently undecided what role Martha Marcy May Marlene star Elizabeth Olsen will procure, but our bets are on Johnson’s love interest, a damsel in distress or feisty ass-kicking dino warrior.

The plot is STILL under wraps, goddamn bastards, but we do know that Godzilla is planning on “returning to its roots” (as in, its TV series roots) with Godzilla himself being described as a “TERRIFYING FORCE OF NATURE”. So be very afraid. What is interesting is how wonderfully awkward Godzilla’s arrival will be in 2014; on the same day as both Rise of the Planet of the Apes sequel Dawn of the Planet of the Apes and Teenage Mutant Ninja Turtles as well as Jurassic World‘s 2014 release. If Ryan Gosling‘s directorial debut How to Catch a Monster actually has anything to do with monsters, then watch the fuck out 2014.

Anyway, the moral of this story is that Bryan Cranston will make Godzilla a hit and we’ll be forever in his debt, because he’s a god.

Are you looking forward to Godzilla, or any other one of the monster-rific films due in 2014?

Previous: Matt Smith to star in Ryan Gosling’s How To Catch a Monster
Next: Maniac poster featuring mad bad Frodo