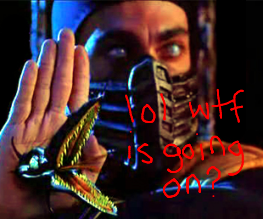 Mortal Kombat was one of those films that seemed awesome in 1995, but has not aged well at all. Amongst peculiar performances and sucky special effects, Paul W. S. Anderson made a fun, techno-filled crap fest. At least it had a lot more NON-STOP KUNG-FU ACTION than the Street Fighter movie. Now Warner has decided the time is right to resurrect the film adaptation of the famously gory game with a reboot.

Lance Sloan, executive over at Warner, revealed that their choice of director is Kevin Tancharoen, who directed much of the Mortal Kombat: Legacy TV series in 2011. His other claims to fame on IMDb are… interesting, to say the least; Britney Spears Live From Miami, The Pussycat Dolls Present: The Search For The Next Doll, and Glee: The 3D Concert Movie. We’re certainly not judging him for his past associations with these ‘films’ but they probably won’t help when it comes to directing a Mortal Kombat reboot. One would hope, anyway.

Sloan also revealed a $40-50 million dollar budget (not a lot nowadays) and the basic premise for the new iteration of Mortal Kombat: a supermarket employee discovers he has magical fighting powers and must make a choice between good and evil. So, yeah, that sounds… just fantastic.

Expect the Mortal Kombat reboot to suck. We hope we’re wrong. Here’s something to tide you over:

Who is your favourite Mortal Kombat character? Which of the colourful cast do you think this supermarket employee will turn out to be? Johnny Cage? Raiden? Reptile?