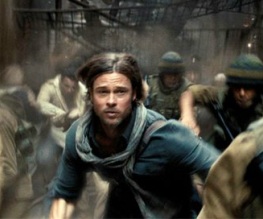 World War Z hasn’t had the easiest production. Plagued by extensive reshoots, rewrites and a generally rudderless direction being reported from the set, the advance word is that Paramount will be licking its wounds for some time after it finally arrives. And hey, better late than never, right? While it was originally slated to share space under the Christmas tree with Django Unchained and Les Misérables, it’s now a summer blockbuster, having been pushed back until June 21st 2013. Paramount are getting the hype machine in gear early (or late, we’re not sure in this case), and a trailer for World War Z‘s first official trailer has surfaced online.

So: Zombies. Lots of them. And Brad Pitt running away from the zombies. Look, we’re not saying any of World War Z‘s production issues are guarantors of a bad film, that’s hardly the case. Consider Hearts of Darkness, Eleanor Coppola’s document of Apocalypse Now‘s painful gestation. The problems facing its production amounted to quite a bit more than a few reshoots. And look at what emerged.

It’s the zombies. PG-13 zombies at that. It’s hard to muster enthusiasm for the walking dead when their 21st century resurgence has gone on far too long. Even if World War Z had arrived on schedule, the sight of endless hordes of a flesh-hungry public doesn’t garner much more than a casual sigh any more. We have massive zombie fatigue, if we’re being honest.

Brad Pitt fatigue doesn’t exist, though. He’s an A-lister with a remarkable eye for choosing good material, and it goes without saying that he’s long proven to be more than just a pretty face. It appears as though World War Z has considerably more zombies than Brad Pitt, but if anyone can anchor a film, it’s him.

Are you excited about World War Z? Let us know below!

Previous: Chronicle writer Max Landis to direct his first film
Next: Mortal Kombat to get a gritty reboot