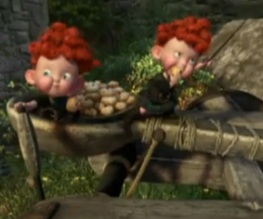 We’ve got a while to wait until Brave is released in the UK on August 17th (or August 3rd if you have the mixed fortune to be in Scotland on a regular basis – however, EIFF fans can catch the closing gala screening this Saturday!), so for now we’re quenching our thirst for spunky Caledonian princesses with a beautiful new international trailer.

The latest video is much lighter in tone than the last few hyper-serious trailers and shadowy photos, showing Princess Merida’s triplet brothers getting into scrapes and her father King Fergus (Billy Connolly) telling an anecdote over dinner. It still ends with that bloody “If you had the chance to change yer fate, WOULDJA?” line, but you can’t have everything.

We’ve also heard today that Brave, which was released in America on Friday, has become the thirteenth consecutive Pixar film to open at number one. Early reviews suggest that it’s stranded somewhere in between the critical failure that was Cars 2, Pixar’s last film, and the widespread acclaim which has attended almost every other film to come out of Emeryville, CA. We’re reserving judgement.

IF YOU HAD THE CHANCE TO CHANGE YOUR FATE, WOUL-oh shut up Merida.