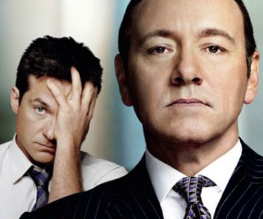 Yep, you guessed it, it’s another ca-razey trailer for the star-studded Horrible Bosses. Jason Bateman, Charlie Day, Jason Sudeikis, Jennifer Aniston, Colin Farrell and Kevin Spacey (what?) team up for what looks to be a fairly standard comedy, with a couple of good jokes keeping a pretty tenuous premise afloat. Oh just watch the trailer, we know you’re going to.

So, Spacey, Aniston and Farrell are the titular bosses, and those-other-chaps-from-those-alright-films are the ones who decide to kill them. Cue sex jokes, disabled jokes, one quite good jokes about a Prius and Kevin Spacey being his character from (the obviously infinitely superior) Swimming With Sharks. Go!

So, what do you reckon? To be honest, we’re not massively enthused. The premise is a little shaky, the jokes feel forced and to be honest, Jennifer Aniston in anything at the moment is the cinematic equivelent to the mine-shaft canary dying. You have been warned.