New trailer for The Hunger Games 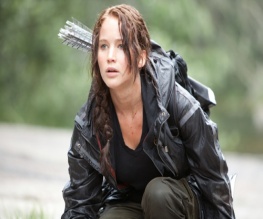 Behold a sneaky peek for the latest book-to-screen adaptation – The Hunger Games, written by Suzanne Collins. Director Gary Ross (with the help of Steven Soderbergh) is in charge of converting a trio of ‘young-adult’ novels into screen-friendly films that will appeal to a wide audience. Including men. Something that Twilight spectacularly failed to do.

Thankfully The Hunger Games appears to feature less slushy romance and more bloodthirsty teeny-boppers. The movie is set in a future society, where occupants live within a culture of fear. Each year a group of children from all over America are plucked from their home and shipped off to a remote jungle where they must battle to the death. Why do they do this? As propaganda for a TV show of course! Basically it’s a cross between Battle Royale and The Running Man.