New Trailer for The Lie 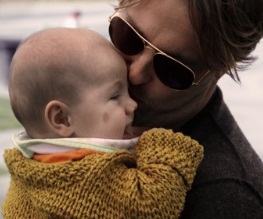 We’ve all, at one time or another, told a lie to get out of work. Most of us stick with the Ferris Bueller tactic of feigning a non-specific illness. Lonny, however, decides to go one step further. In order to get out of work, he tells his boss that his baby daughter has died. Interestingly, it’s written by Mark Webber, best known for playing Stephen Stills in 2010’s Scott Pilgrim Vs. The World. Fun Fact about Mark Webber: Him and his mum were homeless for years. Because apparently not only the plots of Mark Webber’s movies are depressing, his life is also.

Viewing the trailer, it’s difficult to judge whether this is the blackest of black comedy, or Blue Valentine with a fake dead baby.

The movie, starring Joshua Leonard as Lonnie and Jess Weixler as his unfeasibly hot wife, was apparently a big hit at Sundance and will be getting a nationwide release in November. Fun Fact about Jess Weixler: She was in Teeth, that movie about the vagina with.. eh, teeth.

Previous: First teaser arrives for 1911
Next: Five Movies We’d Like to See Re-Made