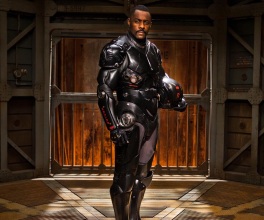 Pacific Rim, the upcoming Guillermo Del Toro sci-fi extravaganza, has finished filming; and despite Del Toro’s insistence that the film not be shot or converted into 3D, it would seem that distributor Warner Bros has other ideas.

Having already shut down production with Universal over an insistance that it keep its intended ‘R’ rating, you would think Warner might not want to push him on the 3D matter; the man has principles, and is clearly willing to fight for them! But apparently a post-conversion job is already well under way…

Starring Charlie Hunnam, Idris Elba and Charlie Day (yes, that’s Charlie Day from It’s Always Sunny In Philadelphia. How bonkers is that?), the plot involves a race of giant monsters known as Kaiju rising from the depths of the world’s oceans to wage war on humanity, who fight back in kind with giant robots known as Jaegers. (And if sickly, black bilge peddlers Jägermeister don’t get in on THAT action, they’ll have missed a huge trick!)

Del Toro was reluctant to shoot in 3D, claiming that the size of these creatures will render them impossible to convey in three dimensions. “To force the 3D effects for robots and monsters that are supposed to be big you are making their perspective miniaturized, making them human scale.”

While the prospect of gargantuan monsters fighting an army of enormous robots in 3D does sound appealing, we’re inclined to side with Del Toro. He’s never made a 3D film, and a cursory glance over his back catalogue should demonstrate that he doesn’t need 3D to create some of the most visually stunning pictures in recent years. After all, nothing would be worse than the giant monsters looking like normal sized monsters. (Although that would provide an inadvertant nod to the ropey old man-in-a-suit monster movies that are Rim‘s inspiration.)

Still, if they can somehow get around the issues that concern Del Toro, then we’re all for it. And if not, we’ve still got Charlie Day fighting monsters.