Pay Up For Those 3D Glasses! 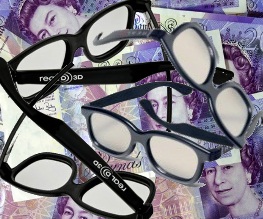 You already know Best For Film’s thoughts on 3D films; we’re not going to open THAT can of worms again. However, we are ready to voice our opinions on the fact that, as of 2012, cinema goers may very well be expected to fork out extra for their 3D glasses.

Sony Pictures Entertainment has set this Indiana Jones-esque ball in motion after stating that they will no longer pay for 3D glasses as of May 1, 2012. And you just know that, once one studio demands cash for their specs, all the other studios will, at the very least, consider the option themselves.

I have a bad feeling about this.

So who is going to cover the cost? You guessed it; according to Sony, it’ll be us. Apparently it’s high time for each and every single one of us to each adopt the ownership model of effect-specs and buy our 3D glasses at the cinema, keeping them and bringing them back whenever we fancy seeing things pop out of the screen. Ugh. Oh sure, we know SOME cinemas do that already, but we just thought they were being mean. Now they’ll just be following protocol, which, let’s face it, is even more annoying.

With a visible increase in ticket prices, as well as this threat of extra purchase in the near future, we’re starting to worry that we just might not be able to afford a cinema trip anymore. That would suck. Time to stock up on the DVDs…