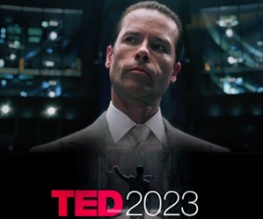 Prometheus is released on Blu-Ray and DVD this week, and the extras have already yielded a few fascinating Easter-eggs; namely, a screen’s worth of text that Guy Pearce‘s Peter Weyland has dictated that seems to indicate that Prometheus occurs in the same filmic universe as Ridley Scott‘s Blade Runner!

Peter Weyland, for those who have forgotten the who’s who of Alien prequel Prometheus, was the head of Weyland Industries, creator of Michael Fassbender‘s advanced android David, and the man who funded the trip to the distant moon LV-223 with the aim of discovering answers to the big questions; Who are we? Where did we come from? Why are we here? Whatever answers they found (we’re not going to go into the various confusions, theories and disappointments of Prometheus), there was certainly no indication that the plot took place in any universe other than the one from Alien.

But the text on the home-release makes clear reference to “a mentor and long-departed competitor”, that sounds an awful lot like Blade Runner‘s Eldon Tyrell, who in that film was the head of the Tyrell Corporation, who manufactured organic “replicants”, rather than robots. Check out the screen-cap below for various other Blade Runner call-backs and see for yourself. 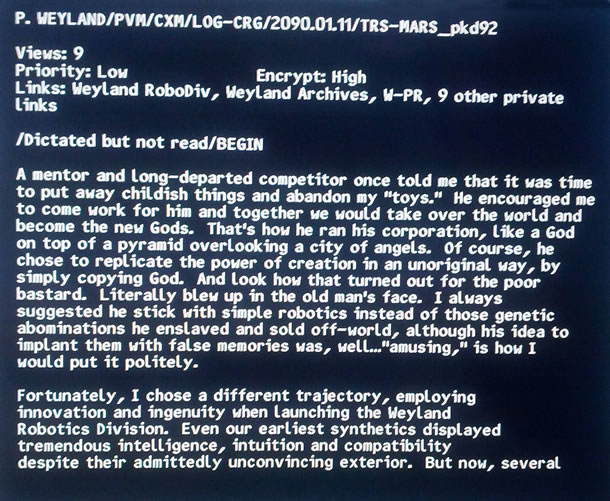 In the same way that the discussion of Prometheus is likely to continue for years, so Blade Runner is also still discussed at length, and this development has some pretty exciting ramifications for the much-mooted Blade Runner sequel that Ridley Scott has planned.

Guy Pearce’s Weyland – an old man in Prometheus – featured in a part of the viral campaign for that film, speaking as a young man at a fictional TED conference in the year 2023. Blade Runner was set in 2019, so if a Blade Runner sequel does indeed materialise, could we be seeing Guy Pearce return to the role? Could that film – which would be a sequel to Blade Runner, but a prequel to Prometheus, which was in turn a prequel to Alien (keeping up?) – feature the relationship between Weyland and Tyrell? The debate between Weyland’s synthetic robots and Tyrell’s organic replicants could be a fascinating one to explore, and it might answer some critics questions about why Guy Pearce was cast to play an old-man in Prometheus instead of, oh, I don’t know, casting an actual old man! Did Scott have this in mind all along?

The thought that all of Ridley’s sci-fi films are set in the same universe is the stuff of nerd wet-dreams, and the above screen-cap seems to prove it. Makes you wonder if there are any other hidden easter-eggs we may have missed? Of course, perhaps we’re getting carried away and it’s simply nothing more than a little thrill for fans. Perhaps Blade Runner 2 will be its own entity, with no links to anything else. But we think the notion of tying them together has huge potential, so we like to think this is more than a hollow hint.

Are you excited by the prospect of a Blade Runner/Prometheus mash-up? Let us know below!

Previous: The Perks Of Being A Wallflower
Next: Michael Fassbender to feature in Terrence Malick drama