Ryan Gosling broods in first footage from Only God Forgives 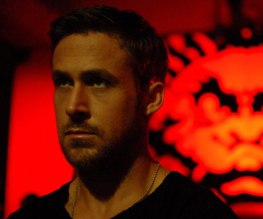 Plates get blown up, a man wears a Scream-type-looking mask, someone is stabbed in a nightclub, someone else is tied up, more people are fighting; it sounds like a Saturday night in Brixton, but it is in fact the FIRST footage we have from Only God Forgives, presented to us by Drive director and writer Nicholas Winding Refn, who once more collaborates and makes sweet sweet love (figuratively speaking) with Ryan Gosling.

We see a lot of Ryan Gosling in this clip, which is as it should be, in between shots of an unrecognisable Kristin Scott Thomas as a luscious blonde. Our first encounter with anything Gosling-related from Only God Forgives led us down a black and white road to a monochrome photo of Ryan looking battered and bruised and hurt and oh poor him he just looks like he needs a big hug and a couple of stitches, doesn’t he?

This is also as it should be, so man up. Ryan Gosling plays Julian, a gangster running a Thai boxing club in order to cover up a big-time underground drug operation. He is all about the gangsterisms this year, hello Gangster Squad. Kristin Scott Thomas is mum, who encourages Ryan Gosling’s character to fight Chang, otherwise known as ‘The Angel of Vengeance’ (pretentious bastard), who killed Julian’s brother. One can only presume that Kristen Scott Thomas is one of those mums.

Cue lots of fighting and boxing rings and one-on-one moments with Chang actor Vithaya Pansringarm (yes, that is his name and no, I will not tell you how to pronounce it). By the look of Only God Forgive‘s first released footage, Drive-genius Nicholas Winding Refn will be delivering more arty violence and more close-up Ryan Gosling shots, which is all we ever want.

Do you want to see Ryan Gosling smile more? Do you think Only God Forgives will be as good as Drive?

Previous: Henry Cavill’s Superman in new images from Man of Steel
Next: Paul Giamatti is not in new John Dies at the End poster