Teenage Mutant Ninja Turtles to get a reboot 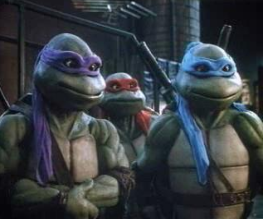 At last it appears there’s going to be a reboot we all can agree on. Yes, that’s right people, writers have been hired to reboot none other than TEENAGE MUTANT NINJA TURTLES.

We all remember the originals; at the opening of the greatest decade ever (the 90s), with its state of the art prosthetics and Vanilla Ice cameos. Four pizza-loving turtles battling a grill-faced ninja lord under the guidance of a big rat is a tale that speaks to all of us. Timeless, you might say.

This will not be some woeful animated reboot like TMNT in 2007. This is the real deal. Paramount have hired Josh Appelbaum and Andre Nemec, both known primarily for their work on TV shows such as Alias, to start putting pen to paper.

Appelbaum and Nemec have also had a hand in writing the upcoming Mission: Impossible – Ghost Protocol script, which suggests they must have done a pretty good job on that to be given their first full feature.

All I’m saying, is don’t further ruin a gem of my childhood, Paramount, don’t you dare.

Previous: Darren Aronofsky wants to make Noah
Next: Daredevil reboot gets a writer