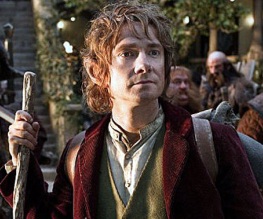 The Hobbit hasn’t released any new promo material for what seems like minutes now, but don’t panic, because a new TV spot has just appeared online. Setting the scene for Peter Jackson‘s forthcoming epics, the thirty second trailer features all the action, heart and humour we’ve come to expect from his vision of Middle Earth. The Hobbit isn’t released until the 14th December, but have a look at the trailer below to get yourself in the mood.

“In a hole in the ground, there lived a Hobbit”. And we all know what those unassuming little Hobbits are capable of! Well, *we* do; the people of Middle Earth don’t have a clue. This being a prequel to The Lord of the Rings, Frodo, Sam, Pippin and Merry’s adventures haven’t raised the profile of Hobbits yet, and so so nobody expects a thing from poor Bilbo when he finds himself on his own great adventure.

The trailer is short, but fantastic, with Martin Freeman continuing to look a perfect fit for the reluctantly heroic Hobbit, and Ian McKellen slipping effortlessly back into his most iconic role as Gandalf the wizard. The trailer shows glimpses of trolls, goblins, big fanged beasties and – most tantalising of all – Andy Serkis‘ precious-hoarding Gollum. Fans of the books will be beside themselves, as it looks like all the principal events from the book are included. Well, you’d hope so. Frankly, given that The Hobbit is not a very long book – and they now have three films to fill – if anything gets left out, they’d better have a damn good reason!

The trailer also demonstrates The Hobbit‘s increased sense of fun. The Lord of the Rings had its share of humour, but it was mostly a weighty, serious story. The Hobbit was written as a children’s book, and so there’s a much more lighthearted vibe coursing through things. “Done much fighting?”, asks Thorin Okenshield derisively: cut to Bilbo struggling to even ride a timid pony. It’s a hilarious gag, and perfectly encapsulates what we hope will be the mix of action and adventure and charm and humour that the final product will display.