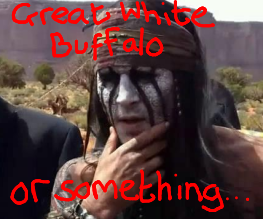 The Lone Ranger has received its first trailer and, well, it makes for rather uncomfortable viewing. A reboot of the classic American TV show, featuring the adventures of the masked vigilante The Lone Ranger and his trusty Native American sidekick Tonto, this reboot boasts Armie Hammer in the lead, with Johnny Depp playing a racially insensitive Captain Jack Sparrow.

The Lone Ranger would have looked like a decent enough action/comedy affair if it weren’t for the perplexing decision to have Johnny Depp play a racist caricature of a Native American. They could have gotten an actual Native American actor to play Tonto. They could have gotten someone who could actually do a passable and respectful accent. Instead, we are given this tremendous douche playing upon a 1950s stereotype of what “Red Indians” sound like.

This isn’t an attempt to be politically correct. There’s nothing inherently wrong with an actor playing someone of a different race, but imagine Johnny Depp doing a similar performance as, say, an African slave, or a Chinese opium addict. It’s all a bit tender. Plus, he looks just like Captain Jack Sparrow in Pirates of the Caribbean: Dead Man’s Chest when he was getting eaten by those cannibals. It’s all rather odd.

That rather large problem aside, The Lone Ranger does actually look like a decent film. The shock of Johnny Depp as Tonto might wear off before the release, and we pray it does, because The Lone Ranger is looks exceedingly enjoyable. And hey, Helena Bonham Carter‘s there. Even better, William Fichtner has a role. You put that man in a film and we’re going to toss some extra stars in there.

Are we possibly being overly sensitive about this? We’ll find out when The Lone Ranger shoots us in the bum in August 2013.

A faithful depiction of the classic character from The Lone Ranger, or an awkward and insensitive attempt at being funny?

Previous: Will Smith is the last guy on Earth. Again.
Next: This is 40 drops yet another trailer