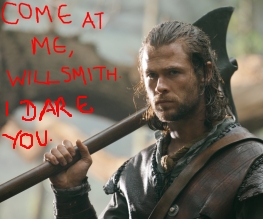 We suppose if you had a hypothetical robot called Archos, and he hypothetically decided to grab all his robot mates and digitally shake them free of the shackles of a hypothetical fascism, thus forming a hypothetical army, ironically of humans’ own creation, the hypothetical hero you’d want would probably be along the lines of Thor; he’s a god, “hypothetical” is his middle name.

Chris Hemsworth is Steven Spielberg’s pick for his newest techno-fear thriller, based on Daniel H Wilson’s novel Robopocalypse. While the Thor star’s role remains undefined, odds are he will be the human defender against Archos and his crewdem, who are using all that artificial intelligence to divide and conquer the humans into several factions of resistance fighters, making several plotlines available for our perusal come release time. Drew Goddard, screenwriter for The Cabin in the Woods has kindly adapted the novel, and Spielberg’s just excited someone’s still letting him make movies about “the global war between man and machine” as if that’s one of life’s most pressing concerns.

Hemsworth is, therefore, a busy busy bee, with shooting having commenced on Thor: The Dark World and Ron Howard’s racing drama Rush in post-production, as well as the sequel to Snow White and the Huntsman to get going on when he gets a minute (the other 94 will presumably be consumed with Kristen Stewart’s repertoire of eyebrow-emoting).

With Spielberg working on Lincoln, the presidential biopic with Daniel Day Lewis and Joseph Gordon-Levitt, the release date for Robopocalypse has been pushed back to April 25, 2014.

Is Chris Hemsworth talented enough for all these plum roles? Or is he just battering his competition with Mjolnir and calling it a day? Let us know in the comments!

Previous: Things that should never happen: A Jumanji remake
Next: More Bourne!