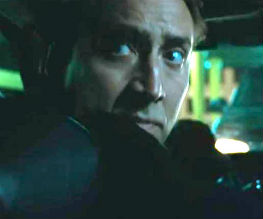 Remember 2010? More specifically, remember Kick-Ass and Bad Lieutenant? Yeah, not happening again. The trailer for Nicolas Cage’s latest film Stolen has arrived, and on this evidence it’s a miracle that it’s even getting a cinema release. Could it be as bad as Trespass and Ghost Rider: Spirit of Vengeance? Yeah, possibly. Let’s look at the evidence.

Ok, so a few things:

– Is that the world’s most boring heist? Break a door, open a safe, stack the money, run away, get caught and immediately give up. RIVETING.
– “You look like your mom!”… Odd that.
– From where we’re sitting, this all appears to be Cage’s fault. Seeing as he burned all the money himself.
– The WORST trailer voiceover ever, whether it’s explaining the plot seconds after the characters have (“I’m running out of time!” “He has just 12 hours!”) or spectacularly failing to say the words ‘Cage’ and ‘Stolen’.

Nicky, we’ve loved you before. But you’ve spoiled it now. Stop dragging direct-to-DVD shit into the cinema.

Previous: Lost’s Mr Eko joins Thor 2 as an elf
Next: Poster (sort of) for Red 2!