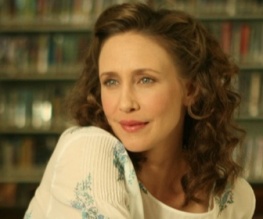 It’s been a while since we had any juicy news on The Drummer, the forthcoming biopic of Dennis Wilson – in fact, so far almost all we’ve been told is that Aaron Eckhart is set to star as the troubled Beach Boys percussionist. Well, some new casting information just arrived (and we bloody love it).

Relentlessly free-spirited actress Vera Farmiga, last seen in Source Code and self-directed drama Higher Ground, has joined the production as Fleetwood Mac singer-songwriter Christine McVie. McVie wrote the song Hold Me (from the album Mirage) about her tempestuous relationship with Wilson, which lasted around two years from mid-1979 – our favourite insane Dennis’n’Christine story involves him having a heart-shaped flowerbed planted in her garden… and then charging it to her. They had no contact between their separation and Wilson’s abrupt death two years later.

Apparently Farmiga is a classically-trained pianist (who knew?) and will be duetting with Eckhart in the film – he, of course, is undergoing singing/drumming/guitaring traininginging in preparation for the role. More on this as we learn it; for now, here’s Hold Me.