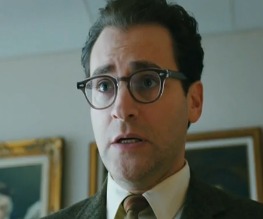 If the film world were to go blind tomorrow, and we had to choose but one team to lead the rest out of darkness, we would happily slip a lead around the necks of Joel and Ethan Coen and follow them wherever they took us. These men are incapable of putting a foot wrong. With A Serious Man the brothers have come up with yet another modern day masterpiece.

The film is set in the American Mid-West of the 1960s, centring on the slow collapse of  middle-class family values, and in particular on husband and father Larry Gopnik. Larry is a Jewish-ish professor of physics, at ease explaining the Schrödinger’s Cat paradox, but at a loss when trying to understand how his life turned out the way it has. In the run-up to his son’s Bar Mitzvah, his wife abruptly tells him she wants a divorce, completely shattering Larry’s comfortable existence and sending him into an almost trance-like breakdown. In his confusion, Larry grasps desperately for some sort of reason, some understanding, and comes to believe that his only hope lies in the local Rabbi, an elderly gentleman who has largely retreated from society. The film follows Larry’s journey from comfortable mid-life complacency to sudden abandonment, tracking the emotional breakdown of a man who has spent his life waiting for an epiphany.[FLOWPLAYER=http://uk.clip-1.filmtrailer.com/3162_8077_a_3.flv,275,180]

How Are They Doing This, Dammit?

The Coen brother’s genius lies in creating material that manages to swing skilfully from the exuberantly hilarious to the bitter and dark, whilst managing to keep everything utterly believable. There is no escape in this film, there is no comfortable journey and as an audience member you really do appreciate the fact that you can’t just sit back and enjoy the ride. You have no idea where each minute will take you; excruciating silence is followed by belly laughs, glorious fantasy suddenly turns into poignant realism. The scene involving Larry’s son’s Bar-Mitzvah shows off their trademark style to perfection; the perspective shifts between Larry’s-wide eyed, glassy wonder, and his son’s-marijuana hazed and blurry, showing a strange and inappropriate kinship between the two characters, one that they will never share. The Coens are witches, that’s the only way it can be explained.

Kudos should also go to the entire cast, who hold up the script and compliment each other beautifully. Casting unknown actor Michael Stuhlbarg as the lead was another small stroke of genius, as not only is his performance flawless, but the fact that we cannot place him anywhere else adds to the disorientating strangeness of the film and of his position in it.  Considering that The Coen’s last big film, Burn After Reading, was full to bursting with A-listers, it’s nice to see that they’re happy to turn away from that tradition. Frankly, they’re just showing off.

Quite simply, not seeing this film will have a detrimental effect on your life. Go and see it. Go and see it now. Stop looking at your diary, for goodness sake, a beloved child’s school play? No longer important. Close your eyes, block out the rest of this world and follow us blindly into the Coen Brother’s pit. Sight or no sight, wherever they’re going, that’s where we want to be.

Previous: Lee Evans: Access All Arenas
Next: The Informant!