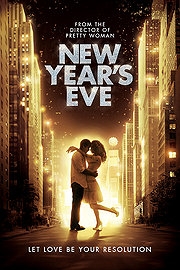 There’s a joke in New Year’s Eve. I was listening out for it, you see, and when it happened, how I laughed. Katherine Heigl is organising the catering for a big New Year’s Eve party before the Big Ball Thing in Times Square, and at one point someone (a hilarious ethnic minority, as a matter of fact) asks her – “are there lots of famous people coming?” and Katherine Heigl replies “there’ll be more celebrities here than in rehab.” How I laughed. How we all laughed. It was a really lovely bit of relief from the two hours I spent hoping that everyone on screen would collapse. Not just the characters, you understand, but the actors themselves. Which is a bit upsetting, really, because I do quite like Robert DeNiro. But it turns out I want him dead. I want Robert DeNiro, and Michelle Pfeiffer and Halle Berry and Jon Bon Jovi and Ashton Kutcher and… and… quite a lot of people dead. I’d do it myself if I had any energy left in this broken body of mine. But I don’t. All I can do now is stare blankly into the abyss forever and wonder at the fact that not even the constant use of the phrase “waiting for the ball to drop” could at any point rouse me from the black horror of watching New Year’s Eve.

It fools you at first. New Year’s Eve fools you into thinking there’s more than one conversation in it. It does this via the means of having lots of characters, so you think to yourself ‘this, this here is a different character, so this is a different situation. They are wearing different clothes and saying different words, I better concentrate because this bit of the story is different to other bits I have witnessed and will come to witness’. No. This is untrue. There is one conversation in New Year’s Eve, and it goes like this:

Ethnic Minority Here Purely For Exposition Allowance: “It’s New Year’s Eve! What about that thing? That thing you need to explain in order for your character to be anything? AY CARUMBA”
A Famous Person: “AH YES. Well you see, some time ago I did a thing, and it was the best thing/worst thing ever. I must correct that mistake/do an important thing TONIGHT, on this NIGHT of NEW YEAR’S EVE in order for it to turn out well”
Ethnic Minority: “BUT TONIGHT IS NEW YEAR’S EVE. IT’S IMPOSSIBLE FOR SOME REASON”
A Famous Person: “NOTHING IS IMPOSSIBLE ON NEW YEAR’S EVE UNTIL I NEED IT TO BE FOR TENSION BUILDING PURPOSES BUT ACTUALLY ULTIMATELY NOTHING IS IMPOSSIBLE.”
Ethnic Minority: AY CARUMBA (falls down) Imagine that conversation, imagine it happening over and over and over again until you slip, groaning and sweating, into a coma. Sometimes it will be a conversation between a papery, dribbly Michelle Phieffer and Zac Efron – whose character consists purely of pointing aggressively and grinning and saying “RIGGARUMBO! CRACKO JACKO!”. Sometimes it will be between Carrie Bradshaw and her daughter, and the daughter will say “you’re being clingy and mean and it’s because you don’t have a man in your life” and then the daughter will run off and Carrie Bradshaw will say to no-one – “I fought so hard for custody.” Sometimes Jon Bon Jovi will try and do it, but he’s got lines like “talk to me, DAMMIT! TALK TO ME!” and the only acting he knows is the acting of Singing Rock Music – which means his legs get further apart the more emotional he’s supposed to feel. At some point Katherine Heigl puts TOO MANY TRUFFLES IN HER MOUTH and has to spit them out, ha. But then Robert DeNiro Dying says “When I was a photographer in Vietnam” and that’s when the laughter stops. It turns out Lea Michele is a good singer and that Josh Duhamel is just sick, SO DAMN SICK of young, beautiful girls with nothing to say. To be fair to Ashton Kutcher, he spends most of it looking pretty embarrassed. Not nearly embarrassed enough, Ashton. Not nearly embarrassed enough. Possibly the most amazing thing about New Year’s Eve is that after it’s all over, after the trying to induce childbirth for monetary gain, the horrible shoe-horning in of The Honour Of Our Troops, the celebration of youth and beauty over anything else, the mockery of the elderly, the absolute lack of any dramatic tension whatsoever, this sloppy collection of soulless, static-haired pay-cheque squeezers have the audacity to show off some hilarious outtakes, outtakes in which they innately grin and gawp, drunk and mad on their own arrogance. At one point, and I swear to you this is true, Jessica Biel produces a copy – sorry, two copies – of the Valentine’s Day DVD from her open vagina, in a wry nod to the brilliant Garry Marshall’s past (and future) success. That actually happens. None of them realised, the poor, cursed fools. No-one realised what a horrible thing they’d done. It’s quite amazing, really. It takes two agonising hours for the ball to drop, but we’re still waiting on the penny.