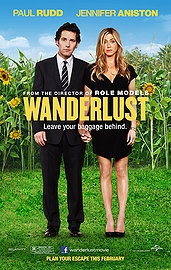 We all happily accept that a premise for a rom-com will never challenge the boundaries of our imagination, forcing us to really consider the nature of love, cinema or life itself. As rom-com plots go however, chucking a couple of recession-hit yuppie urbanites into a California hippie commune is a pretty good recipe for fun – which is what the genre’s all about, right? Yet while Wanderlust exploits the scenario for some good situational gags, these stand out as sporadic funny moments in a script that is sprinkled, rather than infused, with funniness. Linda (Jennifer Aniston) and George (Paul Rudd) are a well to-do New York couple who’ve just bought themselves a small and pricey apartment. Shit hits the fan quickly however as George’s corporate employers go bust and they’re forced to sell their apartment at a loss. On their way to live with George’s brother (an amusingly crude and physical turn from Ken Marino), they stop off at a commune for the night, and are instantly embraced by its eccentric dwellers. After a brief and fiery stay at George’s brother’s, the couple return to the commune, deciding to live there at least until their financial troubles blow over.

The amusing early encounters with the communards are promising. The nudist author Wayne (a well-hung Joe Lo Truglio) chasing George and Linda’s car in the night causes the first genuine laughs in the film, and each of the characters has their own quirks (most of which presumably stem from abusing LSD). Carvin (a highly likeable Alan Alda) keeps repeating the names of the people with whom he set up the commune in ’71; former porn actress Karen (Kathryn Hahn) is menacingly militant about her hippiness; and Justin Theroux is amusingly pretentious as slick super-hippie Seth. The problem is that none of these characters evolve, and the quirks that initially make them distinctive and funny soon become tired gimmicks. After George and Linda move into the commune, their contrasting experiences inevitably test their relationship. While Linda quickly settles into commune life and grows increasingly close to Seth, George feels sidelined, and begins to get the itch to return to big city life. The strain on their relationship comes to a head when beautiful communarde Eva frankly suggests to George that they should make love. When George puts forward the idea of free love to Linda (presumably hoping she’d say no), she accepts, leading to Paul Rudd’s finest moment as he psyches himself up for sex in the mirror with some hilarious redneck dirty talk.

Spread throughout Wanderlust are a couple of hilarious and well-shot set-pieces. Linda’s tripping after ingesting a Peyote-like herb is disturbingly convincing, and the ‘no-doors’ policy in the house leads to some amusingly uncomfortable moments (could you have a conversation with two people in the room while taking a shit?). But these moments don’t reflect the whole film, as much of the dialogue is dull and flat. Ironically, its George’s brother Rick who’s got some of the best lines, even though you’re mainly laughing from shock at his crude misogyny and casual racism. Aniston and Rudd make a decent on-screen pairing. Rudd does a good job of going around looking dejected while J-An embraces her role as a slightly confused hippie convert. Still, their acceptable acting skills can’t overcome an uninspired script, which fizzles out towards the end. The abruptness with which Seth turns from pretentious hippie bell-end to the film’s outright villain is unconvincing, and we don’t care enough about the characters for them to deserve the squirmingly unfunny ‘what happened to them all’ epilogue. This is a good premise for a comedy, but relies too much on repetitive humour and J-An looking undeniably sexy in a hippie poncho for its appeal.