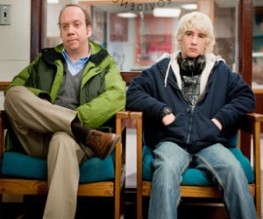 If you’ve seen one quirky indie comedy, have you seen them all? After watching Win Win I am still undecided. With original material and character-led storytelling Win Win is a cleverly named wry look at middle American karma, even if it lacks visual excitement.

Paul Giamatti plays Mike, an attorney with a small practice, a nice little house, a loving wife and two daughters, living in New Jersey. His life, although unexciting, is ticking along nicely. Then one day he discovers that the boiler in his office is about to blow up and will cost thousands of dollars to fix. His business is also not doing so well, so when Mike represents wealthy Joe, who is in the early stages of dementia and has no family in the picture, he offers to become Joe’s guardian. He figures it is a win-win situation, as Joe seems happy enough in a home whilst Mike pockets the monthly guardianship cheque. Soon afterwards Mike meets Joe’s hitherto unknown grandson Kyle (Alex Shaffer). Displaying bleached blonde hair and some fine tattoos, the monosyllabic 15 year old with troubles of his own slowly becomes part of Mike’s family, and the star of his wrestling team, whilst Mike deals with the unravelling of his little con.

5 minutes into the film, I figured that Win Win would fall into the same pattern of indie comedies; and it does. I saw the usual panning camera over greying skies coupled with a heavily dialogue-driven yet dryly funny plot, but Win Win really is a masterclass in the genre. Paul Giamatti does what he does best, playing tired looking characters, all empathic shuffling and droopy teddy bear persona, ensuring that lead character Mike instantly becomes comfortably familiar. Thankfully Win Win also takes the trouble to carefully explore the dynamics behind each of the relationships portrayed in the film. The realities of a straightforward and happy marriage are sensitively addressed (and Amy Ryan is excellent as Mike’s big hearted wife, Jackie), as is the tender developing bond between Mike and surrogate son Kyle, and the jokes come thick and fast, especially from Mike’s cuckolded best friend Terry (played with gusto by Bobby Cannavale). There are a number of ethical dilemmas in the film regarding what responsibility people should take for others, and the win-win situations rapidly start to look lose-lose as the reality of Kyle’s relationship with his mother is revealed. Wrestling does feature heavily in Win Win, but this isn’t a sports movie, more a family melodrama where sport is an outlet for Kyle’s and Terry’s feelings of abandonment.

Written and directed by Thomas McCarthy, Win Win is a further example of a man with a love for the independent genre. McCarthy wrote the script for the heart-wrenchingly marvellous Up, but Win Win bears greater resemblance to another of his films, The Visitor. This is a true ensemble piece, where every line is played with subtle nuance in short and snappy scenes making the story seem pacier than it really is. Yet Win Win suffers from a middle-american identity crisis, as McCarthy illustrates everyday life as gloomy with countless pointless cut scenes to the front of houses or the back of the wrestling gym. Yes we get it, New Jersey lives can be exceedingly plain. Win Win could have been improved by being less drab and the direction less mundane; although in a character-driven piece such as this, perhaps it isn’t expected.

So, whilst I recommend this quietly amusing tale, Win Win finds itself in a world of big studio productions spewing CGI effects which have spoiled me, making me demand more. A good story, fantastic acting and an exceptionally moving conclusion make Win Win a contender, but little dramatic tension and no gasp-out-loud funny moments mean it isn’t quite the winner I hoped it would be.

Previous: Vidal Sassoon: The Movie
Next: Laputa: Castle in The Sky