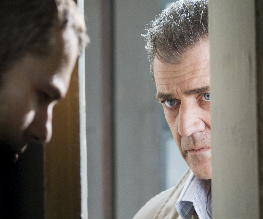 Award-winning, meaty British television dramas are providing plentiful food for thought across the pond in Hollywood. Last year, Russell Crowe, Ben Affleck and Rachel McAdams headlined an accomplished distillation of the BAFTA award-winning 2003 mini-series, State Of Play. Now, we have more political intrigue and corporate skulduggery in Martin Campbell’s slick reduction of the 1985 BBC mini-series, Edge Of Darkness. Surely it can only be a matter of time before Tom Hanks takes on the role of plucky DCI Barnaby in an all guns blazing remake of Midsomer Murders reset to the American Midwest? Adapted for the big screen by William Monahan and Andrew Bovell, the film version of Edge Of Darkness condenses six episodes of edge of seat suspense into an engrossing two hours, transplanting the cat and mouse thrills to Boston.

Mel’s not too old for this… stuff!

Campbell directed the original television series and has subsequently proved his mettle with big budget blockbusters including The Mask Of Zorro and Casino Royale. His credentials with high-octane action sequences come in useful for the sporadic set pieces here, including a couple of bloody-spattered shoot outs. The orchestrator of the carnage is homicide detective Thomas Craven (Mel Gibson), a veteran of the Boston Police Department, who is looking forward to a visit from his 24-year-old daughter, Emma (Bojana Novakovic). A happy reunion turns to tragedy when a masked assassin guns down Emma on the steps of the family home, taking a bullet that many believe was meant for her old man. Consumed with grief, Thomas shuns support from fellow detective Whitehouse (Jay O Sanders), preferring to investigate his daughter’s murder on his own terms. Anguish turns to incredulity as the cop uncovers his daughter’s secret life as an activist. As Craven edges closer to the truth and Emma’s involvement in the Northmoor research facility run by Jack Bennett (Danny Huston), the government hires shadowy figure Darius Jedburgh (Ray Winstone) to silence the renegade detective. However, the enigmatic Jedburgh has his own agenda. “Are you on my side?” asks Craven. “It’s hard to tell…” replies the Englishman ominously. Edge Of Darkness begins at a canter but slows noticeably in the plot-saturated middle act when Craven experiences beatific visions of his daughter from childhood.

Are you talking to me Ray?

Gibson has played the embattled father before in Ransom and he weeps convincingly here, when he’s not beating up shady individuals who stand between him and the identity of Emma’s killer. Confrontations with Jedburgh lack the necessary tension – it’s a pity that Robert De Niro was replaced by Winstone during shooting after reported ‘creative differences’. The veteran, American actor would have brought more gravitas and menace to the role. Plot threads are neatly tied up before the end credits roll and Campbell can’t resist a cheesy final shot to emphasise the importance of family ties.

Previous: The Princess And The Frog
Next: Bourne 4…A Prequel?