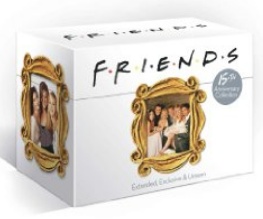 In this wobbly time of financial breakdown, social mistrust and the leadership of Gordon Brown, it’s nice to know that we can always rely on Friends. Like a comforting hug from your Mum, the stories of the six NY pals are infinitely soothing; reminding us of a simpler, oh so much happier time.

The American TV phenomenon first hit our screens in 1994 (15 years ago?! Good Lord!) capturing the hearts of the entire globe with its universal humour, well-written lead characters and of course, the ‘will they won’t they’ relationship traumas that managed to last until the final episode. The finale- screened in 2004- was watched by over 8.6 million people in the UK alone. It’s a cultural treasure, a TV diamond and thoroughly deserves its place in small screen history.

Not only has Friends given us hours of happy viewing, but has given the world limitless instant ice breakers in any situation. Even in the most awkward of scenarios, shouting “could I BE wearing any more clothes?”, “PIVOT” or “We were on a break!” perhaps won’t buy you many admirers, but will at least spark grateful recognition in even the stoniest of hearts.

Purchasing the entire adventures of (say it with me now) Ross and Monica Geller, Rachel Green, Joey Tribbiani, Phoebe Buffay and Chandler Bing means you’ll never be alone again. Even if it did start to go a bit drastically downhill around series seven, we can’t help but open our collections for the group known around the world. Flaws and all. After all, what kind of friends would we be if we didn’t?