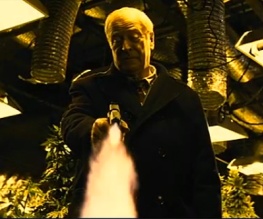 The last couple of years have seen the return of heroes made slightly preposterous by their advanced years – it seems to be a rather fashionable trend at the moment. We had Stallone (at 62) playing Rambo and Harrison Ford (at – Christ! – 67) back in the fedora playing Indiana Jones. Like an ageing border collie that refuses to acknowledge its back legs don’t work any more, the tired, tired eyes of Stallone and Ford serve as an eloquent reminder that they’re just too damn old for this.

So it’s sorta refreshing that Michael Caine’s Harry Brown is all too aware of emphysema, the importance of comfortable slippers and the £1.49 breakfast deal in the T J Hughes café. The first third of the film is a rather melancholy character study of alienation and loneliness in South East London, with Harry and his old buddy Leonard (David Bradley) playing chess in a local pub infested with drug dealers and urban ennui. When Leonard is killed by local yooves, Harry (an ex-Royal Marine who saw service in Northern Ireland) decides enough is enough, and takes it upon himself to be – at the risk of misquoting Travis Bickle – the rain that washes the scum from the streets. Only Caine doesn’t get a mohawk, which we felt was a bit of a gyp.

The Rain Of Caine

The transition between the two halves of the film is something of an oddity; there’s been many comments that the opening resembles something from Mike Leigh (which it certainly does) while the latter half is more Michael Winner.

We, incidentally, can’t stand the Jabba-jowled, pig-eyed reptile that is Michael Winner.

And while it’s true the vigilante vendetta is a bit reminiscent of Death Wish, director Daniel Barber’s grim, uncompromising visuals hit home with an impact Winner couldn’t ever manage. The tone’s different too – Harry Brown is more of a contemporary Western than anything else. All these stylistic flourishes are adept and effective, and Caine’s performance is similarly strong. The fact that his age is highlighted adds much depth and believability to the character, not just in terms of the narrative but in delicately observed nuances from Caine himself. This ranges from the tangible danger he feels from a sudden emphysema attack to the subtle, unvoiced wince of joint pain as Harry bends down to hide in the urban wasteland.

Naturally, the idea of a pensioner going on a rampage and meting out justice to behoodied ne’er-do-wells has struck a bit of a chord with Middle England, who lay awake at night dreaming of this sort of thing. And if anything, this Daily Mail mentality is where Harry Brown falls down. The villains of the piece are ostensibly disaffected, nigh-on-feral teens… and that’s it. No effort is put into exploring them as characters or as victims of any social malaise – despite a few strong performances (particularly from Sean Harris) the youths are as faceless as the hoodies that hide them. It’s reactionary and naïve, and seems redundant when films like Noel Clarke’s Kidulthood are willing to tackle similar issues head-on.

But there’s more to Harry Brown than nourishing your inner Conservative. It’s a bleak yet enjoyable British thriller with Caine (no pun intended) firing on all cylinders. Just don’t go into the cinema thinking it’s social commentary, as it’s not. Accept it for what it is, and nothing more: Spaghetti Peckham.

Previous: Jane Eyre To Hit The Big Screen
Next: Call of Duty Called to the Box Office