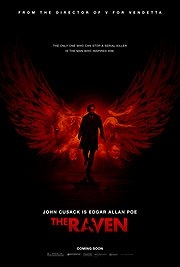 It’s not difficult to imagine the thought process that likely spawned The Raven; it is in fact the culmination of a number of contemporary cinematic trends. Following the likes of Journey to the Centre of the Earth and, more recently, John Carter in disregarding the fourth wall in order to immerse a literary giant in their own mythology, James McTeigue’s The Raven sees Edgar Allan Poe play protagonist in his piece de resistance, albeit one that should never make its way into his official bibliography. Dissatisfied with merely pandering to one zeitgeist, the filmmakers have sought further inspiration elsewhere, throwing a cape around Poe’s neck and reimagining him in the vein of Guy Ritchie’s Sherlock Holmes, as a kooky genius as happy to brawl as he is to spout prose. Out of ideas and low on money, Edgar Allen Poe (Cusack) splits his time between fighting for the front page and vying for Emily Hamilton’s (Eve) hand in marriage. When a murder is committed in the style of one of his stories, Poe is embroiled in a police investigation as Detective Emmett Fields (Evans) faces an ever-mounting influx of bodies. Poe cooperates in the inquiry, forced into action by the abduction of his future fiancée during one of her father’s (Brendan Gleeson) annual masquerade balls. With instruction to fictionalise the police’s findings in a series of episodes to be printed in his usual newspaper, Poe tries to piece together the killer’s clues taking cues from his own collected works before the allotted time runs out and Emily disappears forever.

Unlike the director’s previous effort, the now iconic V for Vendetta, McTeigue’s The Raven comes not from one of Alan Moore’s esteemed graphic novels, but a screenplay from Ben Livingstone and Hannah Shakespeare. Rather than delighting in sharp satire and rhetorical revelry, The Raven lumbers under a mis-mash of lifted verse and fatuous fabrication that is far more smug than it smart. The dialogue is at times unspeakable, consistently evidenced by John Cusack’s uneven delivery. With the sole exception of a reasonable rendition of the poet’s masterwork, and the film’s namesake, very little of Poe’s genius makes it onscreen – an oversight that McTeigue thinks he can compensate for with a novelty fireproof raccoon and a few trillion ravens. But we are getting ahead of ourselves, for I have glazed over the film’s greatest flaw: Cusack. Like all of his films, The Raven has at its centre a black hole of truly staggering proportions. Nothing escapes the crushing density of the actor’s wilting persona, as both the wobbly wordplay and jarring physicality only serve to highlight Cusack’s crippling lack of diversity, and, for that matter, charisma. With his droning voice and expressionless face (not to mention that ridiculous haircut), you are faced with a character who is simply there, constantly, exhibiting little agency as he fauns half-heartedly over Alice Eve’s unforgivably vacant Emily or stands in the corner while Brendan Gleeson struggles thanklessly with an impossible accent. It is only Luke Evans who demonstrates any hold over the audience’s attention, as he tries to ground the tumultuous tone with what amounts to the film’s only passable performance. But there’s clearly more to it than that: V for Vendetta was many things, but beautifully acted wasn’t one of them. Considering the wealth of prefabricated fiction at his disposal, McTeigue somehow manages to fumble the one thing his movie should have had going for it: Poe’s atmosphere. A steady stream of increasingly unwelcome ravens and disastrously unconvincing bursts of fog do little to compensate for the lack of interest and tension elicited by the film’s pace and plot. Despite a few grisly murders (including one which was executed to greater effect in the Saw franchise, of all places), there is little threat as it becomes increasingly clear our heroes are largely safe from harm. I don’t wish to understate just how tedious this mystery is; it’s 111 minutes and feels considerably longer. Murder, he wrote, at his own leisure. Angela Lansbury could have solved it in a quarter of that time.

Derivative, cynical and perilously overblown, The Raven has none of the finesse or force of Poe’s eponymous poem, dazzling only when Cusack puts pen to paper and lets the calligrapher do the talking for him. As if in answer to the Mad Hatter’s own ravenous riddle (printed 20 years before the poem itself), McTeigue assures us that this raven at least is as wooden as any writing desk.