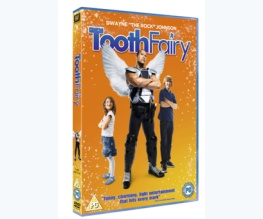 Dwayne “The Rock” Johnson has got a funny old name. He’s an actor now, so he can’t just be The Rock – but he’s not quite well-known enough in his new career to be Dwayne Johnson. So his name is in a no man’s land, like the Blitz frontline borders at Christmas time. From now on, we shall refer to him as Dwayne “Tooth Fairy” Johnson, or The Rock. Or Dwayne Johnson. Or Johnson. Or Dwayne.

Derek Thompson (The Rock) is “The Tooth Fairy”, a minor league hockey player nicknamed for his signature hard charge on the rink battlefield that usually results in rivals losing a tooth. Kids love him, fans love him, Derek has his own VIP area and on-rink La-Z-Boy recliner – but an old shoulder injury has put an end to his dreams of returning to big-league glory. Derek is now a cynical veteran who doesn’t want his young fans growing up believing in impossible dreams.

Derek’s destiny changes when he tries to tell his daughter there’s no such thing as the tooth fairy, and also steals her tooth fairy dollar for a poker game. This is sinking pretty low, and requires that Julie Andrews step in. Like Wolverine, Julie Andrews is the best there is at what she does, namely, being Julie Andrews. As the winged head honcho of a vast corporation of tooth fairies, Julie accuses Derek of “disseminating dreams and committing first degree murder by fantasy”. Derek’s punishment is to grow some wings and work as a Tooth Fairy for the next two weeks.

Being a big burly Tooth Fairy isn’t easy. It’s not just the tutu (which Derek soon modifies into hockey protecto-wear). It’s not just working with an engagingly googly-faced Stephen Merchant (The Office) as his miss-matched buddy line manager. It’s not even getting the bizarre professional advice from tooth fairy Billy Crystal. The real challenge is getting to know your kids and your wife, and stop being a grumpy-faced naysayer when it comes to following your dreams. The Americans are quite big on the Dreaming thing, of course. But this isn’t social comment – it’s a kids’ film!

This Tooth Fairy review ain’t nothing but the tooth

Dwayne Johnson is a very likeable, charming, personable actor. He fits the role in this hugely lightweight kids film better than he fits his tutu. The Rock in a tutu? Utterly bonkers. There are some fairly heavyweight names dotted around the cast, and they’re all perfectly aware they’re in a film designed for kids, not adults. The laughs are designed for children – plenty of slapstick for young kids, with a few multi-syllable jokes that tweens and tired parents willing to watch a bit of brainfluff will also enjoy.

An obvious plot can still be engaging. If you’re an adult who’s had a very, very messy night out, you’ll secretly enjoy sticking this on your DVD come sunday morning. You won’t tell anyone, of course. If you’ve got younger children, you can either have a nap or enjoy a mild and pleasant ride while they fall in love with the Tooth Fairy and stick this on their list of favourite kids films ever, for reasons you’ll accept but never quite understand.