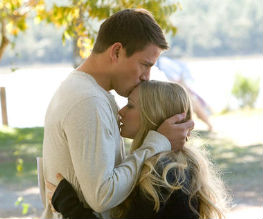 Dear John is a love story based on the book of the same name by author, and king of the romantic novel, Nicholas Sparks (The Notebook). It tells the story of 23 year-old soldier John Tyree (Channing Tatum), who falls in love with do-gooder college student Savannah Lynn Curtis (Amanda Seyfried). Everything goes hunky-dory until 9/11 happens and John has to go off to Afghanistan to fight the Taliban, leaving his lover behind, and they have to keep in touch through writing each other letters.

Dear John is your basic heart-string tugging romance. There’s kids with autism, old men with autism, hurricane-destroyed houses, September 11th and war. In fact the only thing they left out is one of the main characters getting cancer. Oh wait… that does happen.

Yes, Dear John makes every effort to get the tears flowing, but somehow the ducts remain dry. The two leads, Amanda Seyfried (Mamma Mia!) and Channing Tatum (G.I. Joe: The Rise of Cobra) are nice enough (if a little bland) and their relationship does seem very sweet, but that’s about all there is to it. The film plods along nicely during the first half, as does their relationship, but then, very abruptly, John gets his “Dear John” letter and the relationship is over. After this, the film descends into a bit of a mess of different plot threads that come out of no-where and never really resolve properly. It’s a shame, because in the first hour or so we get a fairly promising beginning to a love story, even if it’s a fairly standard cardboard cut-out one. It seems the plot ran out of steam, so sub-plots about cancer and illness are added that weren’t really needed and destroy the flow of the film.

One of best things about the film is the way that it deals with the central incident that changes the characters’ lives: The terrorist attacks of September 11th 2001. 9/11 is something that could easily be exploited (*cough* Remember Me *cough*) but Dear John deals with this in a way that is both subtle and moving without milking it. Savannah is at university and John is off with the army when they see the news on TV, and there’s an effective portrayal of the confusion and dismay that directly followed those horrific events.

Dear John is an ok film. It’s enjoyable enough but takes no risks and does everything by-the-numbers . Topics like the war in Afganistan and autism are touched upon, but only in the most superficial way, with no real insight offered. Amanada Seyfried and Channing Tatum have great chemistry, but the two actors aren’t given enough to work with. Their characters are too perfect, too beautiful and too nice, and it kills any opportunity for creating tension. Teenage girls will be placated by constant shots of Channing Tatum shirtless and showing off his six-pack, but everyone else will want to give this a miss.

Did you enjoy Dear John? let us know below!