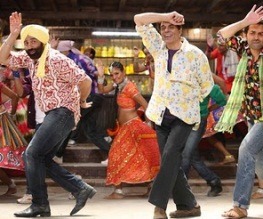 Susan Sontag would literally shit a brick after watching this. Yamla Pagla Deewana, the 163 minute epic from Bollywood, is so camp it makes Burlesque look like The Third Man.

When there’s a machine gun pulled in the middle of a dance sequence about virginity, there seems almost no point trying to outline the plot, but let me give it a go. Paramvir is a family man, living in Canada with two kids and a blonde wife who despises his Hindi ways. Though he tries to disguise his Indian-ness, including wearing Ralph Lauren shirts with big horses on them, the turban/brown skin gives him away, and he retaliates by having his mother live in their house. Per his mother’s request, he goes to Banaras, India to make his father (Indian superstar Dharmendra) and brother come to Canada, discovers they are conmen, falls in with them and there’s just oh, a whole host of fun to be had.

The film has been touted as a ‘comedy crime caper’, and it really doesn’t disappoint. There is much, much capering. People nearly fall off rooftops, pots are thrown at heads, and expressions are perpetually manic. Even a romance between Paramveer’s Hindi brother, Gajodha and a Punjab girl is farcical, whereby the couple tries to escape her disapproving brothers in the manner of Romeo and Juliet, resulting in many jokes about Punjabis which I didn’t get. The insane plot is broken up by an intermission – it’s that long – and some fun song and dance numbers. These were where the director really went to town; there were so many cuts and flashing lights that a seizure warning should have been issued at the start of each.

The faults in the movie didn’t stop there. The opening credits looked like a power point presentation, complete with machine-gun effect dialogue (remember that?) and various ‘slide-in’ effects. The subtitles were unintentionally hilarious: sunglasses were translated as ‘goggles’ and the chorus of a love song was apparently: ‘I am bonkers at you.’ The stunt guys for the film seemed to be on hiatus, as in every fight scene there was a cut and a loud sound effect, rather than the tackiness of seeing an actual punch.

The plot, too, was a little off, its holes feeling more like crevasses. For starters, Paramveer, the family man is depicted as taking on reams of hard men in a scene similar to Uma Thurman and the ‘Crazy Eighty-eight.’ However, he is kind of schlubby – think Seth Rogen in his Knocked Up days, and there is no explanation as to why he can hold up a falling building with one hand.

Despite all this, there is a knowingness to Yamla Pagla Deewana, both in its wry allusions to: ‘second rate Hindi movies’ and several Hollywood movie references, that is quite charming. Honestly, the intertextuality throughout would impress Tarantino. There is a scene where Paramveer stops flying missiles in midair, just like Keanu Reeves in The Matrix, and the fact that the missiles are clay pots only adds to the comedy of the scene.

Paramveer, Gajodhar and their father Dharam make up the comedy conmen trio – eerily reminiscent of The Three Stooges. For all its faults (and trust me, there are loads), Yamla Pagla Deewana is so clearly a labour of love it can afford to be a bit terrible. In spite of the complicated storyline, the lengthy running time, and some dubious special effects, performances across the board are joyous. And why wouldn’t they be, in a film that both subverts, and completely embodies Bollywood cinema.

Previous: Anvil! director to tackle Hitchcock
Next: Short Film of the Week – The Commuter