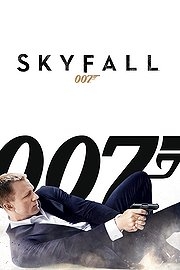 Where Casino Royale rebooted the entire franchise, and Quantum of Solace acted as a direct sequel to it, Skyfall is very much a stand-alone Bond film. If you haven’t seen Casino or Quantum, it really doesn’t matter. And that’s probably a good move.

Skyfall opens – as is tradition – with Bond engaging in a ridiculous chase sequence, trying to hunt down a man who has gained access to a list containing the names of every undercover MI6 agent currently in the field. It’s a sequence featuring a bonkers motorcycle chase across the rooftops of a Turkish bazaar, and Bond driving an industrial digger that rips the back off a moving train. It’s the sort of over-the-top action that Casino Royale did away with, but that’s started to creep back into the franchise here. And we didn’t realise how much we’d missed it! There’s nothing so crazy as to be off-putting (hello invisible car being chased across the ice by a laser from space), but it’s definitely injected an element of fun back into the franchise.

It all ends up with Bond taking a bullet, a long fall, and then spending several months as a dead man, getting drunk and not shaving in some hidden paradise. When MI6 in London comes under attack, Bond is shaken and stirred out of his funk and heads back home to help M deal with a psychopath who has a very personal vendetta. But Bond’s not the man he was. He’s wounded, in more ways than one, so is he up to the task? (In this regard, Skyfall‘s Bond bears more than a passing similarity to The Dark Knight Rises‘ Batman.) 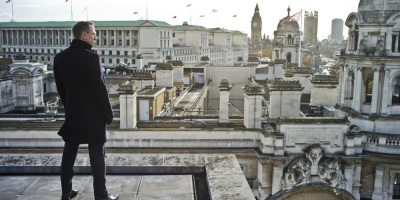 Skyfall is a film obsessed with death. That much is clear from the title sequence, littered as it is with skulls, gravestones, etc, but it also seeps through to the characters. Unfortunately, the film doesn’t have a great deal to say on the matter. There’s no profundity here; just a grim undercurrent to proceedings, and the creeping fear of being replaced by something newer, shinier and better – a motif depicted regularly throughout the film’s use of technology. There are also human examples, in Naomi Harris’ spirited younger agent, and Ben Whishaw’s Q, a character making his debut in the rebooted franchise. Young and barely out of nappies (“You’ve still got spots!” sneers Bond), he’s everything that threatens people like Bond and M; capable old stalwarts who are nonetheless seen as dinosaurs. Whishaw is as perfect a Q as you’d expect, and his weird youth is a good foil for Daniel Craig’s craggy experience. 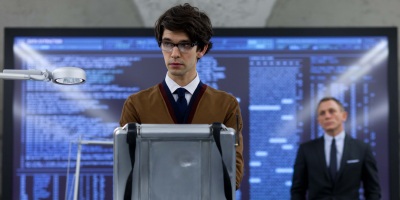 Dame Judi Dench as that indefatigable bulldog M, is an equally good foil. Where she’s been used sparingly in the previous films, usually stuck in London and making the occasional phonecall to reprimand Bond, here she’s firmly at centre stage, and Dench is, of course, marvellous throughout. And then there’s Javier Bardem as the big villain. It’s well over an hour before he’s even mentioned, but his first appearance is well worth the wait. Descending from an elevator, Bardem’s Raoul Silva walks towards Bond and the camera, delivering a soliloquy in one unbroken shot. It’s a striking introduction, and so is the reveal that his male character is just as interested in Bond, James Bond as the litany of lithe women have been over the years. His chemistry with Craig is excellent, and his flirting with Bond adds a new dimension to the good vs bad dynamic. And there’s one other facet to Bardem’s character that I won’t spoil here, but suffice to say it’s jaw-dropping.

Director Sam Mendes – with all due respect to Martin Campbell, Marc Forster, et al – has crafted the most beautiful Bond film in recent memory. It’s arguably one of the most handsome and stylish films of the year. While the ugliness of the obvious and intrusive product placement is undeniable, the actual film is stunning. One sequence, set in Shanghai, is perhaps the year’s best, with the stunning, cold neon landscapes of the city – including a stunning punch-up in electric-blue silhouette – leading into the Chinese Lantern-lit warmth of traditional Shanghai. Truly beautiful, and a stark contrast to the rainy greys of the London sections. 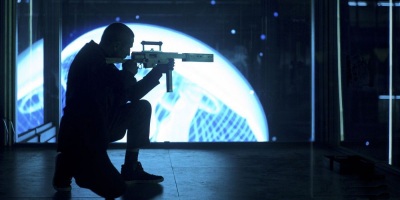 While the first half zips by, and the second is livened up by Bardem, unfortunately the climax is problematic. There’s as decisive moment, just after an exciting set-piece in London (and it’s good to have Bond returning home for so much of this film), when the script could have made a bold decision, but opted against it. Saying much more would spoil things, but it’s fairly obvious once you’ve seen it, and it would likely have spurred on a much more interesting and powerful climax. (And while we’re at it, many of the beats in the later action sequences don’t make even a little bit of sense. That was easier to forgive before Bond grew up, you know?)

As it is, the climax sees Bond escaping to the misty moors of Scotland – and the manor house where he was raised – and the film stumbles. Being an anniversary year, it makes sense to revisit Bond’s roots, but it doesn’t work. The climax at the manor-house – despite some impressive explosions – just isn’t as exciting or as fun as the earlier sections. The buoyancy of the film is lost, and Skyfall sinks in the mire of its own misery. Put simply; where the rest of the film is an almost perfect example of the genre, the climax just doesn’t feel like Bond.

Previous: Student of the Year
Next: Cheat Sheet: Daniel Craig