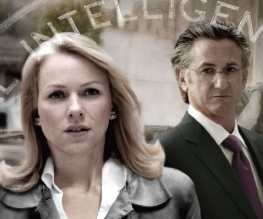 Hollywood loves the CIA. We can hardly move for tales of sexed up espionage experts (a la Angelina Jolie), explosion loving adrenaline chasers (Tom Cruise) or mind-melted revenge-bots (see Matt Damon). It’s easy to feel – upon being presented with CIA-fest Fair Game – that we’re treading on the same old territory. But in reality, the entire point of the CIA is that we remain in the dark about them: who they are, and what they do. So a docu-drama that tells the nail-biting tale of a real CIA agent; caught up in the politics of the Iraq war and outed against her will, is actually pretty unique. In 2003, in the wake of the American Government’s declaration of war on Iraq, an ex-ambassador by the name of Robert Wilson wrote an article entitled “What I Didn’t Find In Niger”. It was a piece that undermined the White House’s entire rationale for entering into war, based on the things he – on commission from the Government – was supposed to have found in Africa (yellowcake uranium, for example) but hadn’t. And not just hadn’t, but hadn’t over and over again. In a spectacular piece of mis-direction, the Government’s response was to leak the identity of his wife Valerie Plame; a CIA agent deeply involved with the search for WMDs, and shout from every media outlet that Wilson had written the article under her deeply biased authority. With only the truth: the fact that based on all probability, there were no WMDs being built in Iraq, behind them, husband and wife found themselves in a battle against the almighty power of the US Government, and against a world that truly believed that war was the only option. As a story, the plot of Fair Game is engaging, intricate and interesting, if a little plodding. As a record of political history, Valerie Plame’s account is explosive, rage-inducing and unforgettable. But the problem is that Fair Game hovers between these two states, never quite fulfilling the potential of either. Merging real news footage from the time with a necessary emotional arc between husband and wife, as an audience you’re always constantly aware that you’re being distanced from what really took place. Usually this doesn’t matter in adaptation (look at The Blind Side, for instance), but in a plot so bound up in fighting for the truth, in the sensationalism of the media and in the vital importance of what these events really culminated in – you can’t help but wish you just had the facts in front of you, rather than (admittedly excellent) performances from Sean Penn and Naomi Watts.

If the entire point of Fair Game is that you cannot and should not twist important information to suit the desires of the masses, why then aren’t we watching a documentary? By deciding to Hollywood-ise the facts, Fair Game doesn’t appear to have quite enough faith in the story it champions, leaving us unsure of what is solid fact and what’s been gilded for cinematic satisfaction. Frustratingly, this film is too action-less be a successful action thriller, but too scripted to feel like a historical account. Trapped in between the two it leaves a funny taste in your mouth; a ghostly feeling of deep political outrage that, sadly, feels slightly unjustified.