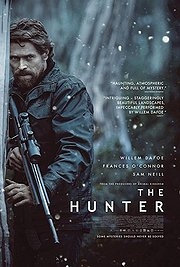 Before she made a career out of making Emily Browning get her tits out, Julia Leigh was a bestselling novelist. She’s currently engaged in adapting one of her two most successful books for the screen – the other one is The Hunter, in which a taciturn gun-for-hire is sent in search of the rarest creature in the world and, as you might imagine, ends up finding himself or similar. It’s perfectly watchable, but you might find yourself wishing the hunter’s pursuit was just a bit more single-minded.

In Paris, Martin David (Dafoe) is seeing a man about a tiger. David is a mercenary with few vices bar solitude – “It must be nice not to need anyone,” comments his contact – and as such he seems like the perfect choice for a very particular job. Secretive biotech company Red Leaf has evidence that a supposedly extinct animal, the thylacine or Tasmanian tiger (it’s actually a marsupial, but what’s an infraclass among friends?), is still surviving somewhere in the remote mountains of its island home. Red Leaf wants DNA samples, and so David heads off to Australia with a cover story, a caseful of traps and a rifle.

When David finally makes it to the backwoods cabin where he’ll be lodging, things aren’t quite how he imagined. His landlady Lucy (O’Connor) spends all her time asleep while her children Sass (Davies) and Bike (Woodlock) run wild and wait for the return of their father, who’s been missing for the last year. David divides his time between staking out the highlands, helping out around the house and dodging the locals; both the logging community and the hippies protesting against their activities mistrust Americans, and equate David with Lucy’s absent husband. David finds himself building an unlikely rapport with Lucy and the kids, if not with their overprotective and surly neighbour Jack (Neill) – but he can’t forget his job. If he doesn’t find the thylacine soon, someone else just might… I’d quite like to see someone try, really try to make a film set in Tasmania that isn’t utterly gorgeous. Returning to the big screen after a decade directing television, Daniel Nettheim was doubtless glad of the leg-up – but he doesn’t simply let the scenery do the work, cutting luxuriant wide angles with earthy, intense shots of Willem Dafoe showing off the stalking skills he learnt in preparation for the film. The scenes shot at Lucy’s cabin are also an aesthetic treat, with firelight and electricity providing a warming alternative to the dim natural light of Martin’s expeditions. By contrast, it’s a shame there are quite so many shots of David driving back and forth between his various camps and the house – the film’s two distinct settings do enough to bugger its pacing, and the interminable cutscenes really don’t help. In truth, this lack of a determined focus is more than a stylistic issue; the audience is jerked roughly from civilisation to wilderness and back just a few too many times, and despite Dafoe’s superb performance it becomes increasingly hard to keep up with David’s motivation.

And it really is a superb performance. Willem Dafoe is absent from barely a shot in The Hunter, and in many ways the film rides on the tense energy he brings to the title role. Martin David is an entirely coherent character, with none of the schizophrenic switches that split roles like this often engender, and Dafoe plays him to perfection as the urgency and danger of his mission gradually ratchet up. The rest of the cast is unmemorable in comparison – Sam Neill is quietly menacing but never really gets fleshed out, while Frances O’Connor’s nervy, helpless Lucy is nothing more than the physical representation of her husband’s absence. Morgana Davies is a spunky, lisping delight as Sass (she and ‘Bike’ renamed themselves), while Finn Woodlock trades heavily on that one serious look on which small kids have the monopoly. It’s fine, though, because none of them really matter – as the title suggests, this is a film about one man, and the rest of the cast are simply there to facilitate Dafoe’s journey. Combining a timely ecological message with an engaging family drama and a timeless depiction of man’s struggle against the implacable force of nature (fans of The Grey should take note), The Hunter certainly has much to recommend it. Nettheim’s years in television have seemingly left him a little unsure of what to do with a feature-length running time, but his talent for visuals is as apparent here as the fact that he’s directed Willem Dafoe to his most memorable performance in years. Whatever it is, his next film will be one to watch.

Previous: Man with the Iron Fists trailer is most ridiculous thing ever
Next: Top 10 actors we wish had stayed hot