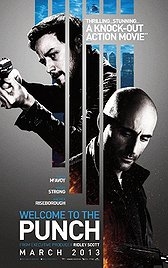 Welcome to the Punch will come as a disappointment to hardcore Mark Strong fans. While the film undoubtedly tries to reproduce the essence that is Strong’s speciality – hard-core crime lord not to be messed with – it never fully manages to build up enough empathy to do justice to his character. The cinematography, while impressive, often feels too clever and so the film turns into an amateur attempted thriller. More so than anything, it fails to cover up the weak script. On the upside, Welcome to the Punch provides an important lesson for film-makers and screenplay writers on the art of storytelling; it shows that not even talented actors, clever tricks and shiny cinematography can hide poor writing.

If you have absolutely no idea who was shooting who in that trailer, here’s the lowdown. Welcome to the Punch tells the story of London detective Max Lewinsky (McAvoy) and his long-standing feud with criminal Jacob Sternwood (Strong). Having fleed England to hide out in Iceland, Sternwood is forced to return to London when his son (Elyes Gabel) is shot and killed when a heist goes wrong. Sternwood’s return and his son’s death finally gives Lewinsky a chance to catch the man responsible for his misery all these years. Lewinsky is blinded by both personal and professional revenge in a kind of Jean Valjean versus Javert storyline that, tiresomely, is the only thing driving the film. Soon, both men discover that an even bigger conspiracy is needed to be solved before they can confront each other.

With lines like “He’s a dangerous man, Max!” and “Don’t go near him on your own, you’re mad!” – it felt like Welcome to the Punch wasn’t giving the audience a chance to forge their own opinion, hence the amateur feel. Almost every time Sternwood’s name is mentioned with Lewinsky in earshot the audience were given an EXTREME close-up with VERY HEAVY BREATHING from MacAvoy to convey that he REALLY hates Sternwood. Whoever decided to shove a camera in MacAvoy’s face and a microphone up his noise is at fault here; it left very little room for the audience not to feel force-fed. All too often Welcome to the Punch needed a little man in the corner of the screen, holding up cue cards with ‘CRY’ and ‘LAUGH’ written on them, but doing little to encourage genuine emotion. 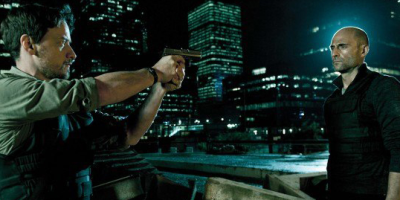 Welcome to the Punch does, however, pack a brilliant cast. Strong gives us a steady performance as the tough criminal with a heart, but what should have been a touching scene between Sternwood and his dead son came across as forced and theatrical – as if Strong were auditioning for his very first film. MacAvoy may not be starring in his most commendable role, but there’s no denying that he pulls off an angry detective with desperate fervour – if a little overboard at times. But again, there just wasn’t a believable enough character exposition to feel much empathy towards either character in what should have been moving scenes. Sadly down to a flat script, making the story unconvincing and the characters somewhat vacuous.

One of the best performances in the film was given by Game of Thrones actor Elyes Gabel as Sternwood’s son. Though only in the film for about 15 minutes, his performance was sharp and exciting and gave Welcome to the Punch a few minutes of explosive tension. Andrea Riseborough as Lewinsky’s detective partner, however, was undeniably wooden. At one point we were made to believe that she was flirting, but it just felt like an embarrassing, sexless performance in a school play. 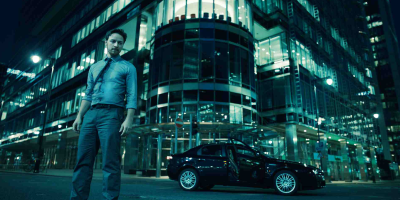 Welcome to the Punch has the blazing bullets, bad guys, storyline twists and the city-after-dark setting, but ultimately it’s a heartless cat and mouse chase with not enough soul to capture the audience. Although director Creevy was heavily influenced by crime thriller Infernal Affairs, it serves only to create a staged atmosphere. Welcome to the Punch may look like a thriller from the outside, but lacks any sort of lasting punch to do it justice.