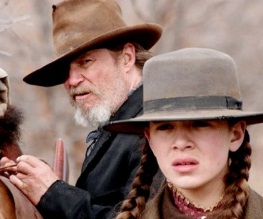 If the Coens can do anything (and, to be honest, those bastards can do bloody loads of stuff), they truly are masters of creating intimate, believable relationships in the space of minutes. Taking their unique character scripting skill and setting it loose on the dusty-eyed, rough-skinned world of the Western was a small stroke of genius; forcing their innate understanding of the complexity of human relationships into far tighter, thin-lipped and bushy moustach-ed restrictions. As a result, everything – from the script to the direction to the actors – work that much harder to create a poignant, witty story that still retains the savage, hardened essence of the Old West. Frankly, they’re just showing off.

Fourteen year old Mattie Ross (Hailee Steinfeld) arrives in a small town in Arkansas with one objective: find the man who killed her father. Having left her mother and siblings grieving back home, she is single-minded in her quest and knows that she needs the help of a bounty hunter in order to bring the killer, Tom Chaney, to justice. After calmly and effortlessly out-witting the local residents in order to get her the money she needs, she knocks on the (outhouse) door of infamous Marshal Rooster Cogburn (Jeff Bridges); a trigger-happy “law” enforcer who’s as happy dispatching rowdy young gun-slingers to their maker as he is finishing the last of their whiskey afterwards. Though Cogburn is evidently past his prime, his mix of utterly incomprehensive gibberish and the fact he’s wearing an pretty awesome eyepatch convinces Mattie he’s the man for the job and, happily, she prepares to journey with him into the wild. The problem is that Chaney is a wanted man elsewhere, and a Texas ranger by the name of LeBeouf (Matt Damon) soon arrives on the scene determined to take Chaney in himself and collect a fine reward for his troubles. But Mattie is resolute – she wants to see Chaney hang for the death of her father, and no dapper, silver-spurred Jason Bourne is going to take that away from her. As long as Cogburn is on her side, Mattie is sure her mission will be successful. But can the young girl trust the wizened old cowboy to help her, when at any point the languid LeBoeuf may make him a far more lucrative offer for his services? With a plot so linear (find bad man, kill the shit out of bad man), the real tensions in True Grit come from the ever-shifting power-play between the three central characters of Mattie, Cogburn and LeBeouf. Though all three actors are magnificent throughout, it has to be said Hailee Steinfeld is jaw-droppingly good as Mattie; mixing innocence, determination and steadfast resolution in a performance that manages to be both heart-breaking and utterly unassuming. Struggling to gain just the attention, let alone respect of the two arrogant, hardy men she travels with she is forced to push past any fear or doubt, knowing that in order to win their time she must show them she has just as much to offer as they. The understandings, arguments, friendships and betrayals that gradually unfold within this strange triangle create the real drama within the piece, with all three performances constantly leaving us wondering who will stand by who. Of course, it wouldn’t be a Western if there wasn’t some darn good shootins, and the brilliantly horrible supporting cast of wandering cowboys provide the targets (though perhaps not as many as some action-lovers would like). Josh Brolin is suitably pock-marked and unpleasant as the wanted man Chaney, and suddenly seeing the sullen, achingly young Mattie through his incredulous eyes we cannot help but panic at the madness of her expedition. As the mission eventually starts galloping towards its conclusion the emotional foundations finally join forces with the plot, and the subsequent climax is unspeakably, heart-tearingly exquisite. Ultimately a celebration of the classic Western, a situation comedy and a dazzlingly tender character study – True Grit may not tell the action-heavy story some fans will want, but it is all the more successful for its quiet faith in one it does.

Previous: Pfeiffer to join cast of Dark Shadows
Next: Paul