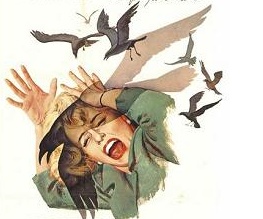 Not content with desecrating the legacy of such horror classics as The Wicker Man, The Texas Chainsaw Massacre and Hitchcock’s own Psycho, Hollywood is now setting out to turn The Birds into yet another lifeless, pointless, remake. If that wasn’t bad enough, it’s being produced by Michael Bay, who’s not only responsible for the decimation of the average blockbuster’s IQ but also the aforementioned (and terrible) Chainsaw Massacre reboot. Oh, and the terrible Friday 13th reboot. And the upcoming Nightmare on Elm Street reboot. Which will be terrible.

Details have emerged that it’s all change in the director’s chair for The Birds. Martin Campbell is out – a shame, considering his directing work on GoldenEye and Casino Royale made us think he could have brought something interesting to the project. He is, however, off to work on the much-anticipated Green Lantern adaptation, so at least there’s that when it comes to a bright side.

Replacing him is Dennis Iliadis, who’s no stranger to the horror remake. He helmed this year’s The Last House on the Left after Wes Craven’s 1972 original. In all fairness, Last House wasn’t quite as much of a train wreck as it could have been, though we’re still sceptical. Hitchcock’s original is going to take some serious beating, even with George Clooney and Naomi Watts tipped to play the leads. We also think there might be a case here of audience backlash – where many cinemagoers won’t be that fussed that Friday 13th gets a reboot, a fondly-remembered classic like The Birds might meet with a bit more opposition.

Still, if it turns out to be terrible, we won’t crow (sorry).