Jennifer Aniston spits in the eye of decent cinemagoers 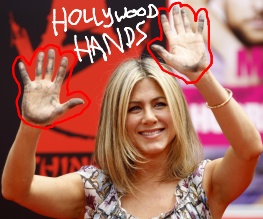 Jennifer Aniston, the TV actress who has since made some films, is inexplicably being honoured with a star on the Hollywood Walk of Fame. Stop aspiring, kids: it’s officially lost all meaning.

Aniston is best known for being pitied by glossy magazines because she’s 43 but doesn’t have a husband or any babies.

Let’s not be unfair, though – she’s also made modern classics like The Switch and The Bounty Hunter, as well as stripped off in Horrible Bosses and supervised the slow death of a dog in that dog film. Aniston has good comic timing and dreadful taste, as evidenced by her series of reasonable performances of shit characters in shittier films, and she was really quite good in Friends (she got about thirty People’s Choice Awards and an Emmy and stuff). But Hollywood Walk of Fame? Really?

We don’t even have the energy to be snarky. It’s just ridiculous and depressing and we want to wake up now, please.

Jennifer Aniston? Why? WHY, GOD?