Pegg and Wright want to get going with next film 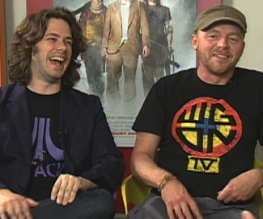 Simon Pegg and Edgar Wright are finally going to get started on the eagerly awaited third instalment of their ‘Blood and Ice-cream’, or ‘Three Flavours Cornetto Trilogy’, The World’s End.

We’ve all been gasping for their follow up to Shaun of The Dead and Hot Fuzz but what with Wright making Scott Pilgrim Vs The World and Pegg busy making Paul and thinking about the next Star Trek movie, it’s looked unlikely that it would ever get under way.

In an interview for Ain’t it Cool, Pegg said: “We already started the conception process, so it’s just a question of when we can get together. I’m just about to start shooting a movie here in the UK, so maybe between that and Star Trek we might get a chance to bang out a first draft if we’re lucky.”

Pegg was keen to mention that they want the film to be different to the others, saying: “You have to mutate to survive, and I think we’re going to make sure that we do that. I’d hate to become stale and predictable.”