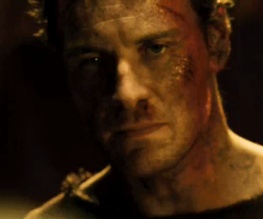 Thanks to some excellent blagging (and no small amount of sexual favours) we at Best For Film are off to the Centurion premiere in Leicester Square this Sunday. But before we can tell you how it was, we might as well fill you in on what it’s all about.

Centurion is a British made Roman warrior epic, directed by Neil Marshall – the man who brought us The Descent and Dog Soldiers. Its stars include Michael Fassbender (of Inglourious Basterds), Dominic West (Chicago, Mona Lisa Smile) and Olga Kurylenko (Quantum of Solace anyone?) and it centres of the legend of the Ninth Legion; an army of 3000 unstoppable warriors who disappeared in the Scottish Highlands without a trace. In Centurion, Marshall has taken this legend as a starting point, and combined it with a story he wants to tell, to create a high tension, high action thriller. He admits

“It’s not meant to be historically perfect. I’m picking up on a legend and exploring it… it’s an action thriller.”

Michael Fassbender echoed this sentiment in a recent interview:

“The idea of Centurion is that it’s a chase film, it’s basically a Roman chase film. And you basically got a scenario where you’ve got an empire coming to an end of its existence. And you’ve got this tribal community who are bringing it to its knees. And it’s basically about a group of Roman soldiers trying to get back across the border.”

Judging by the trailer, Centurion looks to be a beautifully shot, firey-swords-and-lovely-makeup solider romp, with echoes of the kind of scenery that made LOTR so great to watch. But will the film live up to the hype? It’s not out here till April, but check back on Monday for our exclusive Best For Film review!

Excited to see Olga in carefully placed warpaint? Got any tips on what to wear? Let us know below!