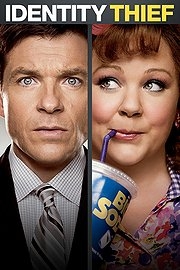 Sandy Bigelow Patterson #1 (played by Arrested Development‘s Jason Bateman) is a nice, reliable, safe guy leading a nice, reliable, safe existence. He pays his bills, has two young daughters and a pregnant wife and is overworked and under appreciated. Sandy Bigelow Patterson #2 (played by Bridesmaids Melissa McCArthy) is an overweight, outrageous extrovert who enjoys drinking, shopping and STEALING PEOPLES IDENTITY. He’s a pushover, she gets everything she wants, he’s mild mannered, she’s bad mannered, he says potato, she says potahto. I JUST CAN’T STRESS ENOUGH JUST HOW DIFFERENT THESE GUYS ARE, as this is, of course, THE ENTIRE PREMISE OF THE FILM.

When Sandy #1 (yes, ha ha, he’s got a ladies name – a joke the film REALLY loves to repeat) finds his credit card has been declined, he’s been arrested for missing his court date in Florida and his police mug shot depicts a large drunk woman he realises that, IT’S HIS IDENTITY… IT’S BEEN STOLEN. So, (instead of letting the bank sort it out) he has to venture forth from his safe existence, find the crazy lady who’s spent all his money, and drive her across country so she can confess to the whole damn affair. There are two things that you can safely presume at this point: 1) this isn’t going to be as easy as is first expected and 2) the ‘journey’ will be both literal and personal as both Sandys will be forced to leave their comfort zones, pick up some life lessons along the way and ultimately (and oh so ironically) discover their TRUE IDENTITIES from one another.

Yup. When Sandy #1 finally confronts Sandy #2, #2 expertly jabs him in the throat (#2’s signature move) and steals his car. After a gripping Sandy V. Sandy wrestling match it also transpires that she is being pursued by gun wielding, murderous criminals and a mentally insane bounty hunter for whom “it’s personal”. From this point on the screen erupts in a plethora of hi-jinks, car chases, poor Sandy #1 having bad things happen to him, Sandy #2 being really annoying and them just generally NOT GETTING ON AT ALL. 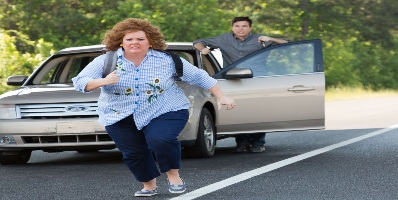 The one reason I didn’t find the horrifically predictable plot too horrifying was Melissa McCarthy. She makes Sandy #2 more than just the walking fat joke the trailer suggests her to be, and her expert, comic timing made even the most basic jokes and more stupidly absurd scenes passable. I know this sounds unlikely, but when she’s having vulgur, loud sex with a large Texan in a Motel room it somehow manages to symbolise a necessary and important part of her character development, rather than just be a gross-out scene (although, it’s that as well). And moments I would usually find examples of pointless, lazy script writing, like when she vomits green stuff all over a policeman’s breathalyser, are actually well delivered. She manages to bring pathos to a character who, without her input, would be horribly 2D. The script clumsily and obviously reveals Sandy #2’s insecure side (in the opening scene a bar tender tells her “these aren’t your friends, they only like you because you’re buying them drinks”) but she just manages to depicts subtle hints of Sandy #2’s insecurities in body language and facial expressions which allows her to get around the thinness of the material. Old reliable Jason Batemen does his usual straight laced, straight man persona he does in everything. 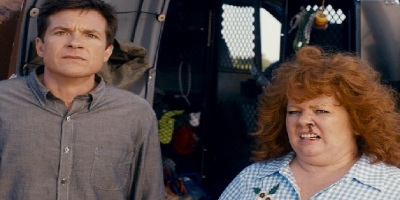 But there are many considerably less successful components of Identity Thief. The sub-plot of the murderous gangsters on her trail (played by Rapper/actor T.I. and The Last Stand‘s Génesis Rodríguez) is unnecessary, dull and completely incongruous with the tone of the rest of the film. The other extraneous characters who are supposed to provide extra excitement just add to the film seeming like a bit of a mess.

However, despite its clear, plentiful faults Identity Thief is undeniably fun. I just wasn’t expecting to like it as much as I did. It may have been the free beer that they gave me at the press screening but I laughed. OUT LOUD. Quite a lot.

Previous: Lone Ranger releases new trailer
Next: Best For Film’s Favourite Flicks #14 – The Lord of the Rings: The Return of the King