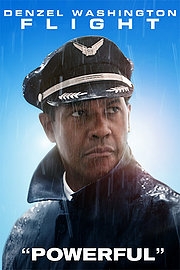 Denzel Washington’s Oscar nomination for Best Actor should attract some much-needed attention to this disaster movie-cum-addiction drama, which might be otherwise lost in a sea of Oscar contenders. But there is much more on offer in Flight than first meets the eye. Director Robert Zemeckis, (a qualified pilot himself) here returns to live-action filmmaking after more than a decade. Most remember him for his Oscar-winner Forrest Gump, but Flight may be his best work to date, creating nail-biting tension and a thought-provoking punch.

We meet Captain ‘Whip’ Whitaker (Washington) on the morning of the fateful flight, lying in bed after a wild night, snorting a few lines and drinking the last of a beer to wake him up. There’s a storm brewing and a lot of turbulence to get the plane off the ground, but Whitkaker’s in control (or so he says), and gets the plane flying high without a hitch. He even has a nap at 30,000 ft, that is until the plane malfunctions and starts plummeting through the air at sick-making speeds. In case your knuckles weren’t white enough, Whitaker then decides to fly the plane upside-down, in an attempt to keep the horizontal position (this happened in the real-life crash too, when the plane attempted to fly upside-down, but the wreckage was too far gone by that point).

Managing to land the plane with only 6 casualties out of 102 passengers, Whitaker is considered a hero in the press; that is until the toxicology report reveals that he was flying high on drugs and booze and the investigations begin. Whitaker tries and fails to quit his habit, but he’s being pressured by the pilot’s union (Bruce Greenwood and Don Cheadle), who are closely following him, trying to prove his innocence and stop him being jailed for murder. He makes friends with a recovering heroin addict Nicole (Kelly Reilly) while in hospital, and together they try to find themselves again. 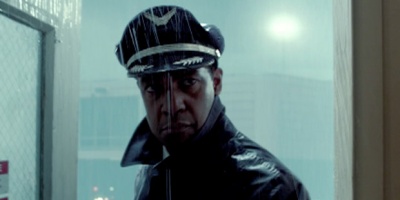 Cinemagoers expecting an action film will be disappointed by the film’s anti-climactic structure. For a film about a plane crash, the majority of the time is spent on the ground. Despite this, Whitaker’s personal struggle is just as intense as the adrenaline rush of the plane in freefall. Every time he reaches for a drink, it’s a painful watch and becomes increasingly strained as he nears his court date. Washington is outstanding as the alcoholic in denial, and wears the corrupt authority figure well, as he did in Training Day.

Flight becomes a simplistic story of moral choices, but has some interesting things to say about Christianity along the way, which some critics of the film have already called ‘Christian-bashing’. However, although they are generally portrayed as over-zealous while Whip is atheist, the message is redemptive and has fundamentally pro-Christian values. The film’s best scene (and coincidentally, director Zemeckis’s favourite scene) is one where Whitaker meets a cancer patient nearing death. You can watch the scene here. It best shows the film’s philosophical edge, and the overarching debate over whether Whitaker was in control of what happened on that fateful day or not. Was it in fact, all of God’s plan? 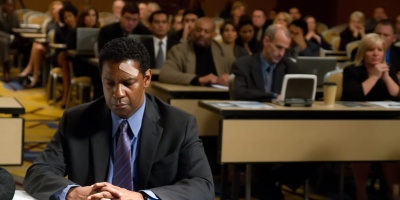 This is a film anchored by fantastic lead performances, from Washington, Reilly, Greenwood and Cheadle, not forgetting John Goodman putting in a turn as Whip’s drug dealer; a dude straight out of The Big Lebowski, who is followed around a soundtrack by The Rolling Stones. The romance between the two addicts is clichéd and never quite gets off the ground, but Flight is an enjoyable and thought-provoking trip nonetheless.