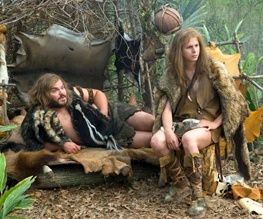 Jack Black, Michael Cera, the Bible and a lot of jokes about circumcision. From the off, Year One was either going to be gleefully wonderful, or absolutely terrible. Unfortunately, a lazy script, no discernable plot  and complete disregard for the audience’s intelligence makes this film primitive indeed.

It’s such a shame. Jack Black, what happened? You stole the show in the wonderful High Fidelity, School of Rock was simply glorious and your Tenacious D hits gave you a reputation of being a ridiculous but refreshingly entertaining scamp. Why mess it all up? Be Kind Rewind, Nacho Libre The Holiday and now this? Are you trying to ask for help?

The plot. We’ll try our best here. Zed (Black) and Oh (a predictable but still loveable Cera) embark on a pre-historic adventure after they are thrown out of their tribe for eating forbidden fruit. They set off on a madcap, crude and sexually explicit romp around the bible, encountering Cain and Abel, Abraham and Isaac along the way. Their ultimate goal is to win the hearts of two tribal maidens, and hilarity ensues. Or rather, unfunny jokes about pooing and Jack Black’s pointy eyebrow thing ensues. The crux of the comedy lies in the fact that the characters talk as if they’re in 40 Year Old Virgin (and indeed, for Paul Rudd, playing Abel, this is actually the case), but they’ve got togas on! And beards! And funny names! Crazy! For about 3 minutes.

In terms of mocking Christian history, this film clearly isn’t really trying to. It’s just using the ‘wacky’ setup as a platform for even more Judd Apatow type entertainment. Fair enough, if the film was actually funny. Sadly though, it just isn’t. When you consider what marvellous work can be done with such context-the wonderful Monty Python’s Life of Brian being the obvious example- the whole premise of this film seems lazy, contrived and a little baffling. Oh Jack. You disappoint us so. Never mind Year One, we recommend you go back to square one, and start giving us the stuff you used to.