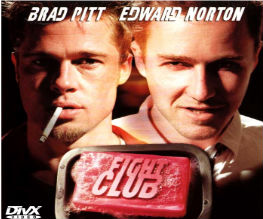 Based on the book by Chuck Palanuik of the same name, Fight Club by director Dave Fincher is one of the rare examples of the film being an improvement on the book. Although a film which appears to poke fun at Hollywood culture and the aspiration to the perfect size zero figure, the decision to cast both Edward Norton and Brad Pitt, two huge Hollywood icons in themselves, has not affected the anti-corporate message of the film.

I can’t get no sleep

We are first introduced to Edward Norton’s character whose name is deliberately not known. He works for a car company in a mundane office job. He also has a macabre obsession with self-help groups. Basking in other people’s pain, he finally finds peace and is able to sleep after months of chronic insomnia. However, this is short-lived as he is introduced to Martha Steward (Helena Bonham Carter) who also pretends to be ill to attend the self-help groups. Knowing there is another ‘faker’ in the room Edward is again unable to sleep.

The first rule of fight club is…

It is at this point that Edward, whilst on a business trip, meets Tyler Durdan a soap salesman. Whilst he returns home Edward finds his apartment has caught fire destroying everything he has worked for. He then rings Tyler and they both begin to live in his dilapidated house out of town. Edward’s character soon finds a new pastime as he and Tyler set up Fight Club; an underground boxing club where men can come and partake in a nihilistic ritual of violence. This club soon expands attracting many members and transforms into a terrorist group under the umbrella Project Mayhem. An operation intent attacking all forms of corporatism and ultimately with the destruction of modern society itself. The film ends with an intriguing twist, as both Edward, Martha and Tyler’s relationship come to a head in the dramatic conclusion of Project Mayhem.

This film is definitely a cult classic. If you feel stuck in the rat-race of office life, this is the perfect escape for you!  The relationship between main two characters works well. Tyler Durden, a smooth cool soap salesmen and Edward Norton the somewhat nervous and paranoid office worker. As well as this the director has placed a number of hidden messages spliced into the film meaning that everytime you watch it you will always see something new!