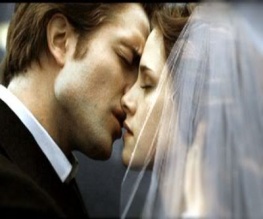 Did you hear the collective *squeal* from teen girls around the world? It’s all down to those pesky vampires. With the advent of the MTV Movie Awards comes the first trailer for the eagerly anticipated (well, until Harry Potter and the Deathly Hallows Part II comes out) but not exactly tripping off the tongue Twilight Saga: Breaking Dawn Part 1.

Unsurprisingly, the trailer is all about the wedding between wimpy Bella (Kristen Stewart, getting oddly prettier with each film) and undead romantic Edward (Robert Pattinson). The trailer also shows the couple’s trip to Brazil and some bedroom shenanigans between woman and vampire. Oh la la tweenies!

However, those Team Jacob members need not fret, as Taylor Lautner manages to get his kit off in a totally gratuitous fashion for half of the 2 minutes below. There’s even some much-needed action courtesy of the Italian Volturi vampires. SPOILER ALERT: (if you’ve been living on another planet) it seems that Bella might also have contracted some seriously evil tummy trouble.

The Twilight Saga: Breaking Dawn Part 1 is out November 18th. Try to get a grip until then.

Previous: Star Trek 2 may not make its release date
Next: Twilight takes everything at MTV Movie Awards