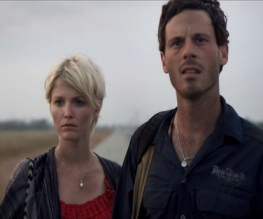 Monsters imagines a world shared with extra-terrestrial creatures brought to Earth when a specimen-clad space probe breaks up over Mexico as it re-enters the atmosphere. Six years on, a reporter (McNairy) is tasked with ensuring his boss’ daughter’s (Able) safe return. When they miss the last ferry out of Mexico, however, the pair face an arduous journey through the infected zone to the wall protecting the U.S. from the roaming creatures.

For all of the accolades and critical brown-nosing it received, it is easy to overlook the more traditional action components of last year’s District 9. While Sharlto Copley’s picture of desperation was rightfully recognised as an incredible performance, splatter-happy alien weaponry and the Aliens-esque stand-off which ended the movie single it out from more highbrow fare.

Therefore when Gareth Edwards’ Monsters is deemed “the new District 9“, it’s easy to see why many might be disappointed by this minimalist take on the traditional alien invasion. Monsters, like Neil Blomkamp’s film, deals with the after-effects of First Contact as the extraterrestrials are cordoned off and quarantined, leaving civilisation to continue as best it can. However, rather than dropping the soap-box half way through to blow the effects budget, Monsters‘ pay-off never really comes. The aliens aren’t the focus of this story, they are a catalyst, an excuse to examine the relationship between two individuals as they are forced to re-examine their beliefs and re-evaluate their lives. I personally wouldn’t compare Monsters to District 9, but to Paranormal Activity, with strategically placed wreckage evoking creaking doors and chiming cookware.

When the creatures do present themselves, they don’t disappoint. Teased by way of news footage, the creatures don’t make their big screen début until the film’s final act. Holed up in a disused petrol station, and homaging a certain scene from War of the Worlds, the conclusion grows organically from the rest of the movie. If, by this point, you are expecting a heavily edited maelstrom of special effects, you have clearly come to the wrong place. Taking their inspiration from jellyfish, the monsters themselves are strangely elegant and magisterial; if Pandora had a Cloverfield monster, this would be it. This movie, however, belongs to McNairy and Able, who slowly make their way across the infected zone, bearing witness to the degradation in which the area’s human inhabitants are forced to live. While there are no memorable monologues or instances or high melodrama, the actors never fail to convince as they are desensitized to the injustice faced by Mexico and monster alike. Their burgeoning relationship grows organically and believably as they each reveal more and more of their lives back home, their initial cordiality giving way to genuine affection and acceptance.

While short of stand-out moments, Monsters is one of the most poignant and honest alien invasion movies that you are ever likely to see. A sweet love story against a catastrophic backdrop, Monsters tells the traditional humanity under threat movie from ground level with a maturity and restraint that Skyline wouldn’t recognise if it saw the light. Don’t let the rating fool you, however; while there may be an absence of gore and naughty language, this is undoubtedly the most adult monster movie you will see all year.

Previous: New I Am Number Four Trailer
Next: Serial Killer Days gets the go-ahead